Contemporary IHL came into being with the original Geneva Convention of 1864. It has evolved in stages, to meet the ever-growing need for humanitarian aid arising from advances in weapons technology and changes in the nature of armed conflict; all too often, these developments in the law have taken place after the events for which they were sorely needed. The following are the main IHL treaties in chronological order of adoption:

1868   St. Petersburg Declaration (prohibiting the use of certain projectiles in wartime)

1899   The Hague Conventions respecting the Laws and Customs of War on Land, and the adaptation to maritime warfare of the principles of the 1864 Geneva Convention

1925   Geneva Protocol for the Prohibition of the Use in War of Asphyxiating, Poisonous or Other Gases, and of Bacteriological Methods of Warfare

1972   Convention on the Prohibition of the Development, Production and Stockpiling of Bacteriological (Biological) and Toxin Weapons and on their Destruction

1993   Convention on the Prohibition of the Development, Production, Stockpiling and Use of Chemical Weapons and on their Destruction

1996   Revised Protocol on Prohibitions or Restrictions on the Use of Mines, Booby-Traps and Other Devices (Protocol II [revised] to the CCW of 1980)

1997   Convention on the Prohibition of the Use, Stockpiling, Production and Transfer of Anti-Personnel Mines and on their Destruction

2005   Protocol additional to the Geneva Conventions, and relating to the Adoption of an Additional Distinctive Emblem (Additional Protocol III)

This list clearly shows that some armed conflicts have had a more or less immediate impact on the development of IHL:

During the First World War (1914-1918), methods of warfare, including those that were not completely new, were used on an unprecedented scale. These included poison gas, the first aerial bombardments and the capture of hundreds of thousands of prisoners of war. The treaties of 1925 and 1929 were a response to those developments. 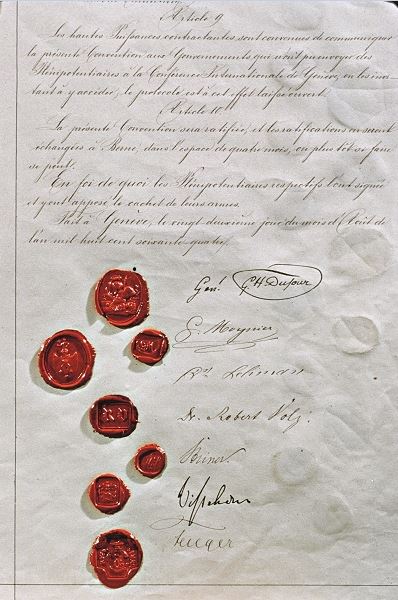 In the Second World War (1939-1945), civilians and military personnel were killed in equal numbers, as against a ratio of 1:10 in the First World War. In 1949, the international community responded to those shocking casualty rates, and more particularly to the terrible effects the war had on civilians, by revising the conventions then in force and adopting a new instrument: the Fourth Geneva Convention for the protection of civilians.

The Additional Protocols of 1977 were a response to the consequences, in human terms, of wars of national liberation, which the 1949 Conventions only partially covered through Article 3 common to the four Geneva Conventions (common Article 3).

The Geneva Conventions of 1949 and their Additional Protocols of 1977 contain almost 600 articles and are the main instruments of IHL.

IHL is developed by States mainly through the adoption of treaties and the formation of customary law. Customary law is formed when State practice is sufficiently dense (widespread, representative, frequent and uniform) and accompanied by a belief among States that they are legally bound to act – or prohibited from acting – in certain ways. Custom is binding on all States except those that have persistently objected, since its inception, to the practice or rule in question.

In 1995, the ICRC embarked on a detailed study of the customary rules of IHL: it took approximately ten years and was published by Cambridge University Press in 2005.

This database provides an updated version of the study and is divided into two parts.

• Rules: This presents an analysis of existing rules of customary IHL. Although extremely detailed, the study does not purport to be an exhaustive assessment of all rules in this area of law. This part of the study is available in Arabic, Chinese, English, French, Russian and Spanish. A summary of the study and a list of the rules are available in many other languages.

• Practice: This contains the underlying practice for the rules analysed in Part 1. It is regularly updated by the ICRC, in cooperation with the British Red Cross. Source materials are gathered by a network of ICRC delegations and by National Red Cross and Red Crescent Societies around the world and incorporated by a research team based at the Lauterpacht Centre for International Law at the University of Cambridge.