For a long time this African country has been suffering from a severe drought that has led to a dire humanitarian crisis and loss of life. The International Committee of the Red Cross (ICRC) mobilized to assist and has distributed 100$ to 60,000 families (about 360,000 people) for the purchase of food and seeds that would hold them until the rains come: “We are fighting for our lives” 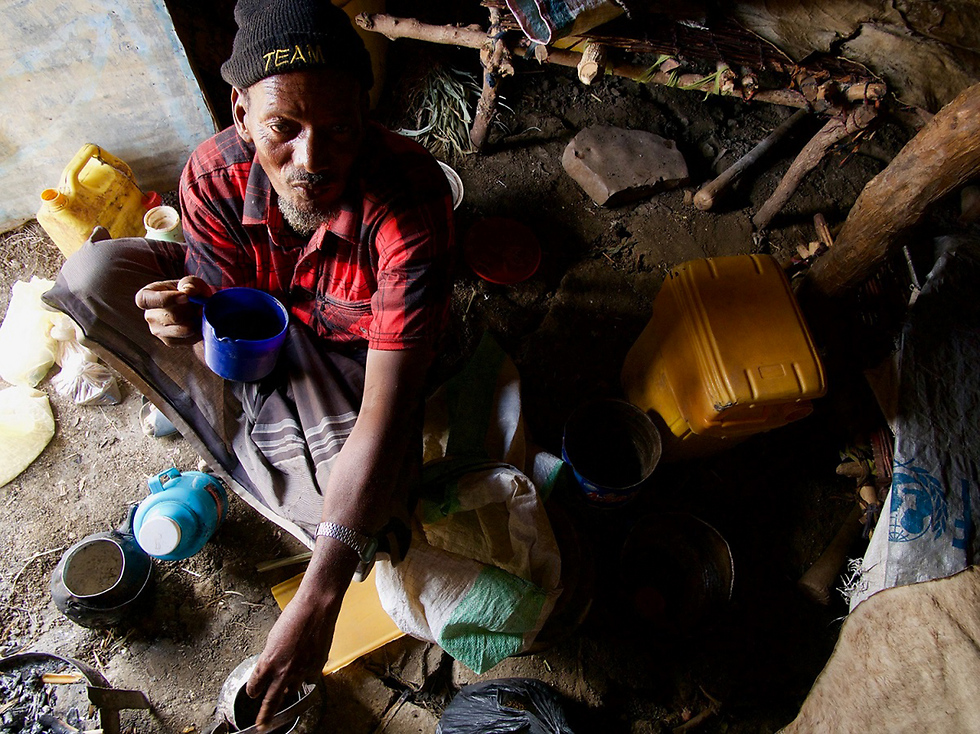 Isaack from Baidoa town is counting on this year’s Gu rainy season (between April and June) to help hims and other farmers like him earn back their livelihood. Most of the annual rainfall in the country (75%) is recorded during this season. Farmers are amongst the worst hit by the drought and the lack of rains. Photo: ICRC/Abdikarim Mohamed

Isaaq Gaas, a 54-year-old farmer in Anjaraale village, 15km from Baidoa town in Somalia, lost all his crops in the wake of the severe drought that has ravaged most of the country for months. As a result, he had to move his wife and children to one of the crowded IDP camps on the outskirts of the town, so that they could get food and water from humanitarian aid agencies. He himself had recently returned home to start worrying about his fields for next year..

The family of Garen Ismail, 25, and a mother of six boys, was also affected by the drought. Her family once had eight cows, but she had to sell them all to survive. They tried to keep the cow as much as they could, but eventually, they decided to sell it too for ten dollars. 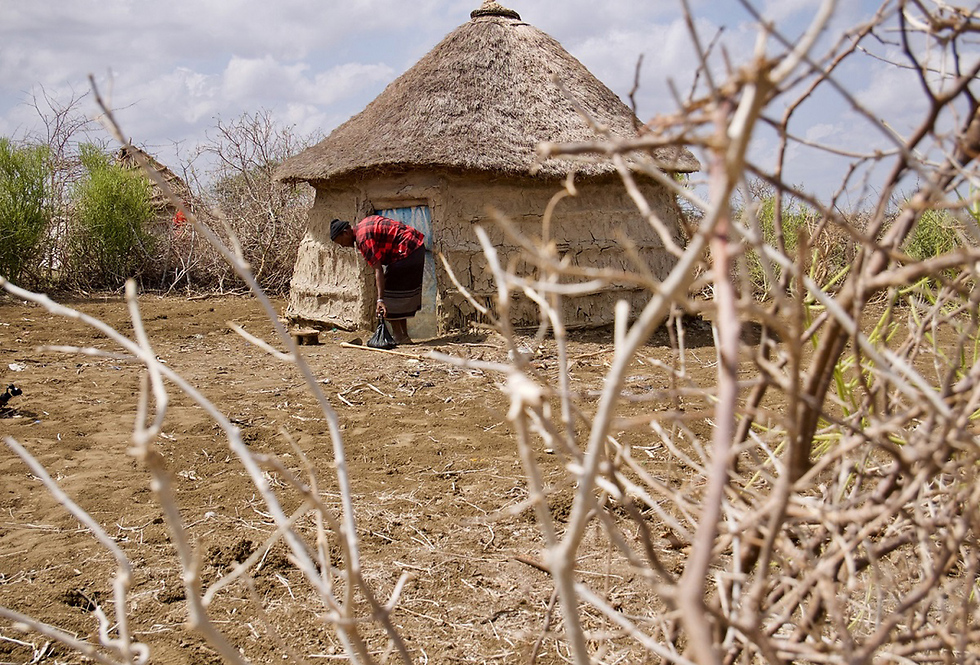 Isaack Ibrahim is one of 3,148 rural households in Baidoa district that received $100 dollars in cash from the ICRC to help them cope with the drought. He spent some of it on food for his family and used others on seedlings and farming inputs in anticipations of the rains. Photo: ICRC/Abdikarim Mohamed

The International Committee of the Red Cross came to the aid of Gaas and Ismail. The International Humanitarian Organization launched a new program in the drought-stricken African country, where some 60,000 families (360,000 people) have already received a cash grant of 100 dollars each to enable them to buy food and seeds to grow.

Cash to victims of conflict and natural disasters in Somalia has been used by the ICRC before as an alternative approach. Since 2013, cash grants have been provided to families during emergencies such as drought and floods, in cash for work programs to dig rainwater catchments or irrigation canals as well as in income support to build resilience among IDPs.

Gaas said that with the grant he received from the Red Cross, he bought food for his family and seeds to look after the future. “We have no means to deal with the drought, we are struggling for our lives and just stay where we are,” he said. “But we sown, we will be saved from thirst, we are just waiting for rain.”

The day before she sold her last cow, Ismil’s family received a message from the Red Cross that it would be among the recipients of financial aid. Thanks to this assistance, the family managed to keep the cow, buy food and water, and provide security for their children for the near future. Now she could stay in her house and wait for the drought to end. 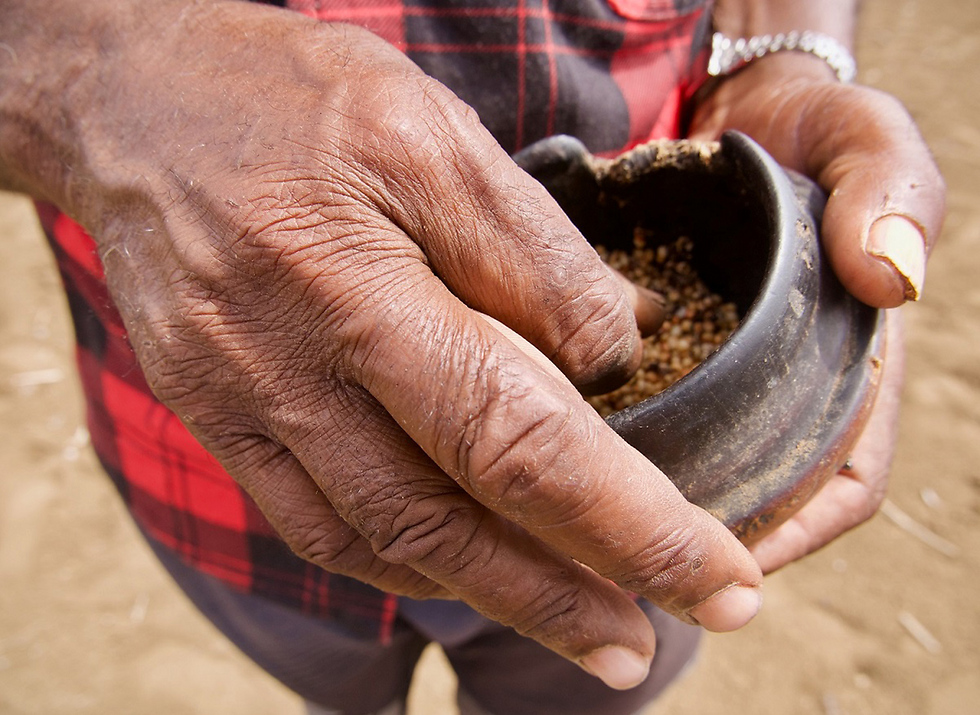 Sorghum is a popular crop amongst farmers and is the staple food in most homes in Anjaraale village. They don’t demand much attention and the harvests of the families sees them well beyond the next rains in December. The stalks of the crops are also fed to the animals. Photo: ICRC/Abdikarim Mohamed 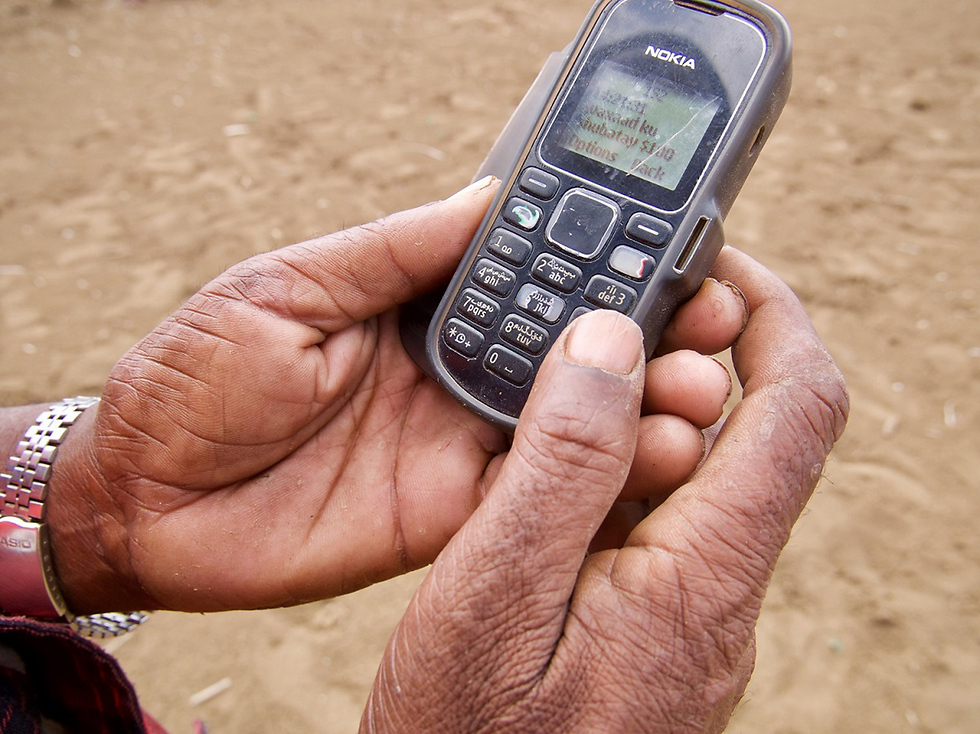 A text message Isaack received on his mobile phone: “You have deposited $100 dollars in your account.” Photo: ICRC/Abdikarim Mohamed

In Somalia, the International Committee of the Red Cross provides humanitarian assistance such as food, medical assistance, facilitation of access to water, rehabilitation of wells, and water supply to the animals in order to enable the population to cope with drought.

For many months, the African country has been suffering from a severe drought that has led to a severe humanitarian crisis, and the fear a similar famine disaster that stroke Somalia 2011, when an estimated 260,000 people died of starvation, the country’s violent conflict and because of the lack of access to humanitarian aid. The rains in Somalia last spring were not enough to ensure the growth of crops, while the animals in the region continue to die of starvation and thirst. 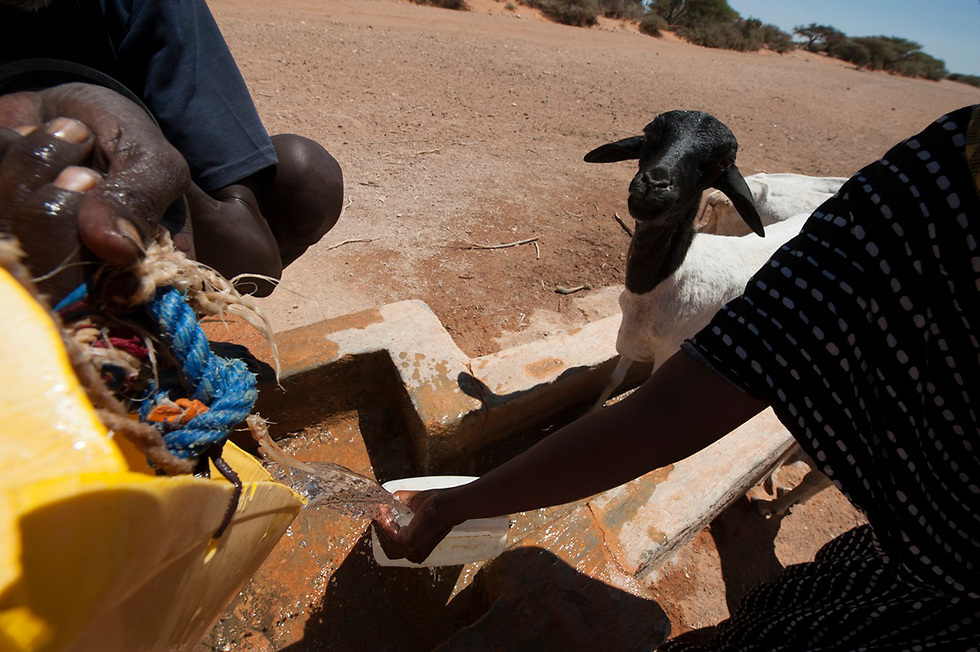 A shepherd helps a young girl fill water in her jerrycan. The wells are the only place where locals can fetch water during the dry season. The ICRC constructed a subsurface dam, a system that stores groundwater in order to improve access to water in the area. Photo:  YAZDI, Pedram / ICRC 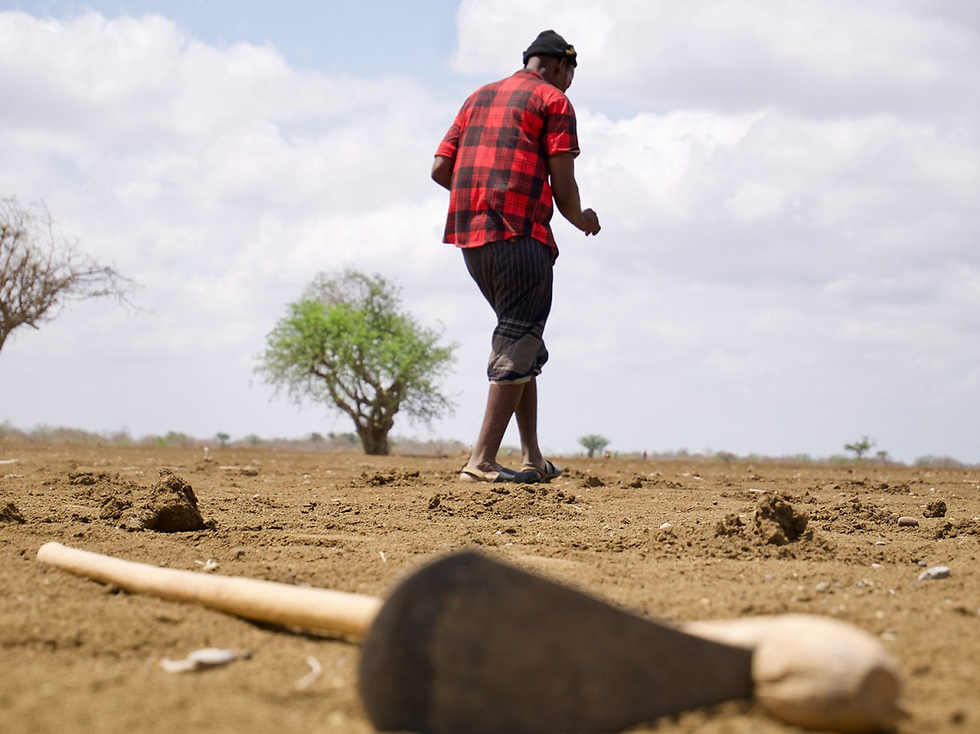 Isaack sows a thin layer of sorghum seeds in a row before covering it with soil. His hope that the anticipated rain will help him get back on his feet and support his family. Photo: ICRC/Abdikarim Mohamed 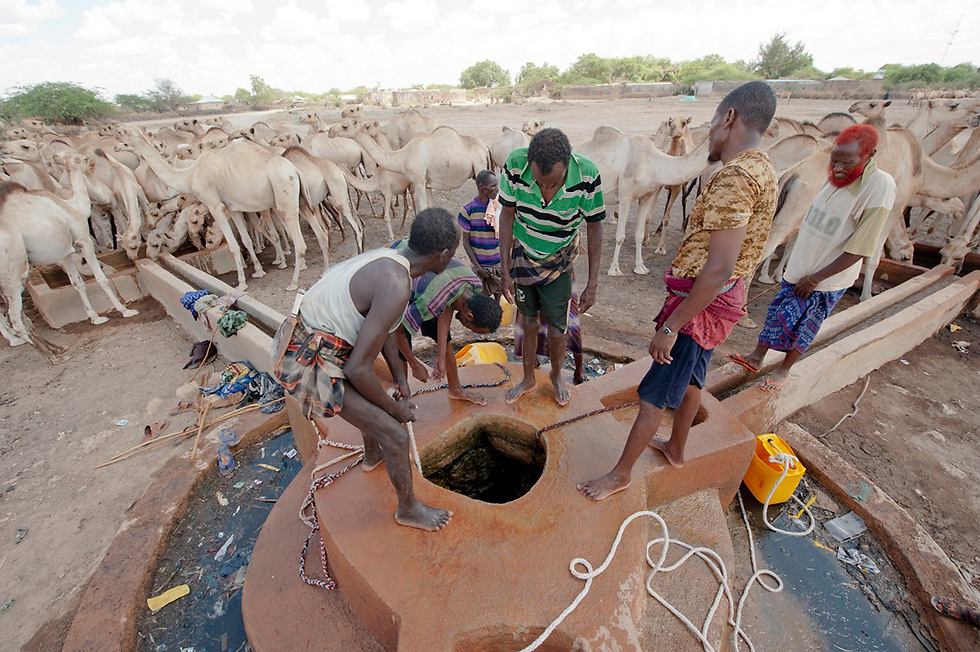 Today an estimated 6.2 million, more than half the country’s population, suffer from acute food shortage and the number of severely malnourished children is on the rise. This desperate situation comes in the context of a conflict that has disrupted the livelihood of the residents and disturbed vital services such as health and water, and led the country to a deeper crisis situation. 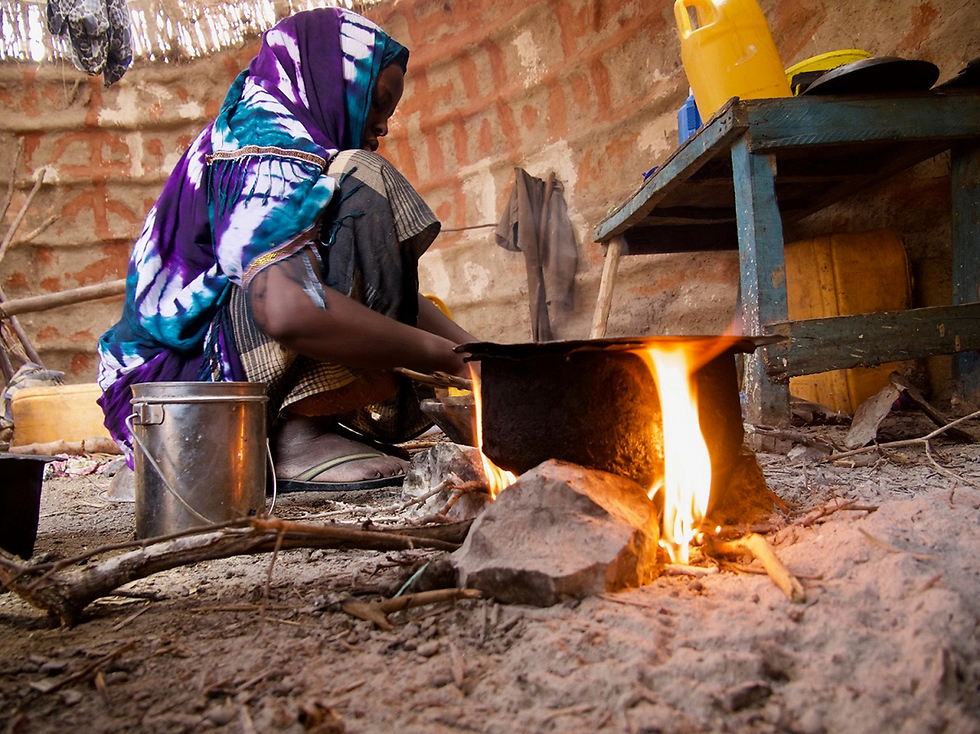 Garen Ismail prepares lunch for her husband and six children. Thanks to the money received from the ICRC, she was able to pay up the debt she accumulated and even bought food and supplies from her home. Photo: ICRC/Abdikarim Mohamed.

As a result, thousands of people from rural areas were forced to leave their homes and to seek a livelihood in the cities, and others arrived at IDPs camps where they received food, water, and medical assistance.