International Day for Mine Awareness and Assistance in Mine Action 2017

For some children in Gaza, lessons can be a matter of life and death.

The curtain rises and silence seizes one of the classrooms in Tunis School in the Gaza Strip. Around 30 children listen attentively as two puppets appear on stage as part of the Mine Risk Education (MRE) programme implemented by the International Committee of the Red Cross (ICRC). The programme aims to raise awareness and promote safe behaviour among students and teachers, particularly regarding Explosive Remnants of War (ERW).

Mohammed Aldeeb, 11, played one of the two puppets and is one of almost 20,000 students, who have been part of the MRE programme since its launch in 2016. “I enjoy being part of the puppet play because I make my classmates aware of the risks of ERW. I tell them not to touch strange objects because these might be dangerous and could hurt us, kill us or cause our limb to be amputated,” said Mohammed.

According to the United Nations Mine Action Service (UNMAS), since the 2014 conflict with Israel, approximately 6,000 items of unexploded ordnance (UXO) could still be in the ground in the Gaza Strip, 16 people have been killed and 97 injured, including 48 children, due to contact with ERWs. 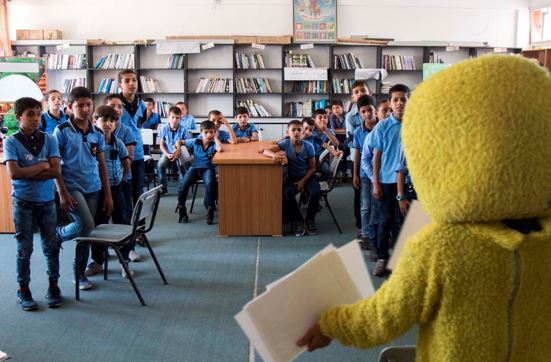 The clearance of Gaza Strip will take many years, and realistically a residual level of contamination will always persist. However, the children of Gaza keep playing in the schools to learn a lesson that could be worth a life. Photo: Jesus Serrano Redondo/ICRC

“It is very important for students to be aware of these objects, especially now that they are in the phase of gaining knowledge. It is crucial that they know that they must not approach such objects and put themselves in danger. They could get injured, get a limb amputated, or even get killed,” said Esam Abu Abdeh, who has been teaching at Tunis School for eight years.

Tall and soft-spoken at 32, Esam is one of 87 teachers from 43 schools in Gaza that are part of the MRE programme. He speaks passionately about his students and the importance of teaching them what to do in case they find an ERW – a lesson that could be a matter of life and death.

“Many students in our schools have been affected by unexploded ordnances. Particularly those located in border areas that were shelled several times during the last war,” said Esam, while holding one of the posters he uses to teach his students.

The MRE programme recognizes that for students from grades one to six, most of them under 12 years of age, it is not so easy to understand all the technical information about ERW. At their age, they respond better to entertaining activities. The programme, therefore, makes use of puppets, interactive games, and other familiar objects to get students’ attention and teach them what to do when they come across a dangerous object.

Ahmed Sami, 10, one of the audience members of the puppet show, remembers how he and a friend saw a rocket on the streets after the 2014 war. “My friend wanted to get closer to it. First, I wanted to touch it, but I remembered what the teacher told us – that it might explode and I could lose my leg or hand, or even die. I told myself that I had better tell my father, so I did and he called the police,” said Ahmed.

Like Ahmed, the majority of children have already been through several wars, and bear the psychological scars associated with enduring such events. “Some of the students suffer from insomnia and others are afraid of lightning and the sound of thunder because they are reminded of the sounds of the bombing and shelling they experienced during the war,” said Esam. 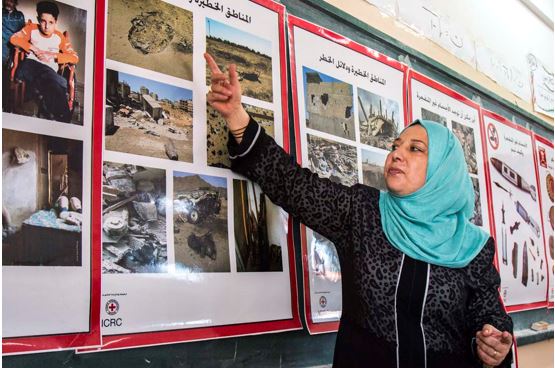 Eman Abdel Men’em explains to their students the different forms in which they can encounter UXO. Photo: Jesus Serrano Redondo/ICRC

A familiar example for the students of Tunis School is Doaa, an 11-year-old girl, who saw a strange object on the side of the road on her way home from school in 2015. She picked it up thinking that it was a toy. It turned out to be an UXO, which exploded and caused her to lose her right hand. Read more about Doaa’s story

The clearance of the Gaza Strip will take many years, and realistically a residual level of contamination will always persist. However, through activities like the MRE programme, children of Gaza can keep playing while also learning lessons that could save their lives.