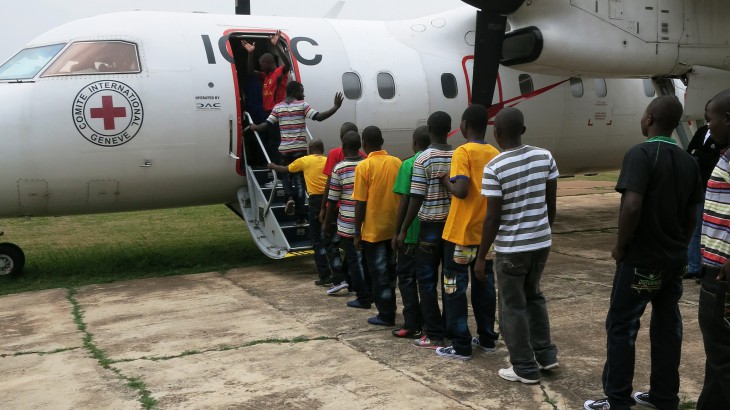 Families living in the eastern provinces of North Kivu, South Kivu and Orientale are due to be reunited with their children today after months or even years apart. The 147 boys and five girls all belonged to armed forces or groups until recently.

“Voluntary and forced recruitment of children is still a widespread problem in this country,” explained Tanja Cisse, who runs civilian-protection activities for the International Committee of the Red Cross (ICRC). “Such recruitment is prohibited by both national and international law. This is the message we must get across.”

Children are sometimes recruited by force but, more often than not, they volunteer to join armed groups, either because it is a means of survival, or to avenge or defend their community. They may be sent to fight on the front line or be used as cooks, porters, messengers, scouts, mascots, spies or sex slaves (particularly girls, who are sometimes forced into marriage).

This nomadic, violent lifestyle takes a heavy toll: wounds (sometimes leading to serious disabilities); pregnancy; lack of education and health care; psychological distress; detention; and sometimes rejection by their community. “Going back to being a child or a teenager can be very difficult,” said Ms Cisse. “We are there to prepare them, help them settle back into family life, and try to ensure they won’t be recruited again.”

In Kamina, a city in the country’s southernmost province Katanga, the 152 children are being housed in a centre run by national charity APEDE. ICRC staff collected the information they needed to trace their families and have been working with the children in the centre to gradually prepare them to return to their communities.

Youth workers run awareness-raising sessions to encourage the children to resist any further attempts to recruit them. This is an important part of social reintegration. “Alongside members of the child-protection agency, which runs this centre, we have spent several days talking to the children, in groups or one to one,” said Marie-Geneviève Nightingale, who is in charge of the ICRC’s child-protection work in the east of the country. “Using games, dance and discussion, we encourage them to think about what they can do to make their return home a success and about the risk of being recruited again, whether voluntarily or by force.”

To trace the children’s families, ICRC staff – sometimes accompanied by volunteers from the national Red Cross – travel vast distances by car, motorbike, bicycle or on foot, often to the most remote parts of the country. In July and August 2014, the ICRC reunited with their families 99 children formerly associated with the armed forces or other armed groups as part of the government’s demobilization programme. Several flights were organized from Kamina military base to take the children to their homes in the north-east of the country.

“Sometimes families refuse to take children back,” explained Ms Nightingale.”They’re afraid that their behaviour won’t have changed or that they’ll be rejected and stigmatized by the community because of the violent acts they’ve committed in the past.”

The ICRC tries to tackle that stigmatization. It organizes meetings in the villages affected where everyone can discuss the issue and be involved in the children’s long rehabilitation and return to civilian life. Games and training sessions focused on the risks of recruitment are also run jointly with volunteers from the youth section of the local Red Cross. Three months after a child returns home, ICRC staff visit the family to make sure everything is going well. After consulting beforehand with their families, the children – depending on their age – receive school supplies or the means to start a small business and thereby forge community ties.

In 2014, in the Democratic Republic of the Congo, the ICRC:

At the end of the year, 576 children were being monitored by the ICRC while they waited to be reunited with their families. They are living in transit centres or with host families in different parts of the country. 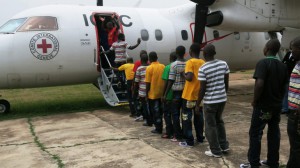 Congo. A group of demobilized children boards an ICRC plane at Kamina military base. The plane will take them to their homes in the north-east of the country. CC BY-NC-ND/ICRC/Augustine Nziavake