Fighting has intensified recently in and around Donetsk, resulting in civilian casualties and preventing the ICRC team in Donetsk from carrying out its humanitarian work. “We once again call on all parties to refrain from harming civilians and to comply with international humanitarian law,” said Michel Masson, head of the ICRC delegation in Ukraine. “In particular, we remind them that indiscriminate attacks are prohibited. We are deeply concerned about the escalation of violence in eastern Ukraine over the past two weeks. The tragic death of civilians in a bus near Volnovakha in the Donetsk region on 13 January is one of many incidents that highlight the unacceptable situation in which ordinary people find themselves.” Harsh winter conditions and the suspension of benefit payments in some parts of the Donetsk and Lugansk regions are making the situation even more difficult. The ICRC is distributing food, hygiene items, medical supplies and construction materials to both residents and displaced persons in the Lugansk and Donetsk regions, working in close cooperation with the Ukrainian Red Cross and the local authorities. The ICRC is conducting humanitarian visits to people held in places of detention run by the Ukrainian authorities in Zaporizhia, Odessa, Poltava, Kharkiv, Mariupol and Kiev. On 15 January, ICRC teams also started to visit people held in prisons in Donetsk, which are not under the control of the Ukrainian authorities. This is the first time that the ICRC has visited such facilities since it started operations in Ukraine. The purpose of the ICRC’s detention visits is to monitor the treatment of the detainees and their conditions of detention, including the availability of food and medication. The ICRC visits people detained in connection with conflict and violence all over the world.

– delivered more than 2,000 tonnes of aid to areas not controlled by the Ukrainian government in the Donetsk and Lugansk regions, including food, hygiene items, medical supplies, blankets and tarpaulins;

– provided food and other items to more than 45,000 people in the Donetsk and Lugansk regions, including both local residents affected by the conflict and displaced people;

– delivered roofing materials and tools to the municipal authorities, to enable much-needed repairs to public and residential buildings damaged by shelling;

– provided wound-dressing materials, surgical items, blood-transfusion sets, insulin, other medicines and other medical supplies for the treatment of people wounded in the hostilities and of internally displaced persons to 45 hospitals in the Donetsk and Lugansk regions, including those in Donetsk and Mariupol;

– issued vouchers to displaced people in Kharkiv and Mariupol through the Ukrainian Red Cross Society. As of January 2015, around 35,000 people had received vouchers, each of them worth 200 Ukrainian hryvnas (a little over 15 US dollars).

– in Crimea, western Russia, the Northern Caucasus and Belarus, the ICRC has helped Red Cross branches to distribute supplies, including food parcels and hygiene items, to 60,000 people displaced from Ukraine. 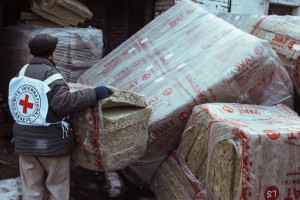 Ukraine. An ICRC employee offloads a consignment of insulation that will be used to repair buildings damaged by fighting.
[CC BY-NC-ND / ICRC / M. Dondyuk] 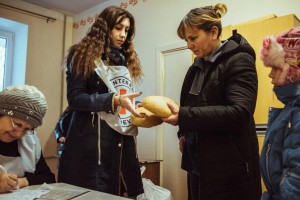 To find out what the ICRC is doing to put an end to attacks on health workers and patients, go to www.healthcareindanger.org