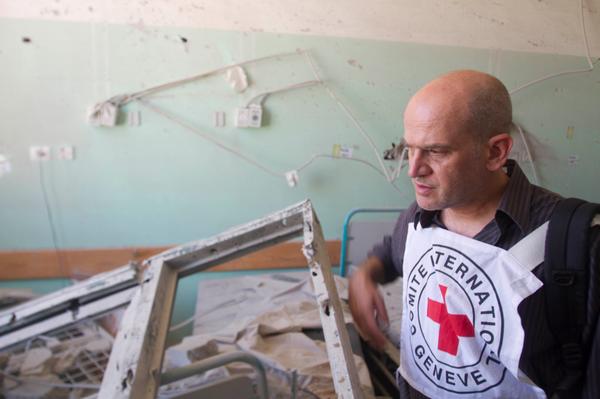 29-07-2014 by Jacques de Maio, ICRC’s head of delegation in Israel and the occupied territories, back from Gaza.

“North Gaza, middle of the afternoon, on a street in front of a seven-storey building.

A little boy is playing alone with a football. A man kneels down in front of him and smiles. Taking the boy’s hand in his own and holding it as a caring uncle would, he says: “May God protect you.”

Abdel*, the boy’s father, notices the man talking to his son and does not like it: the stranger is a ‘wanted’ member of a militia. In military jargon the man is a ‘high-value target’; everybody knows this.

He calls his son over and sends him to his mother, on the fourth floor. A few minutes later, the building has been sliced in half by an airstrike. There no longer is a fourth floor.

When the father awakens in the hospital – the very hospital that was shelled a few days before, killing patients and injuring scores of civilians, including medical staff – his first words are: “Where is my family?”

The doctors will tell him soon enough that his family is dead. His little boy, his wife and his mother, among others. That his left leg is gone too in an above-the-knee traumatic amputation. Beside him, a three-year-old girl, Fatima grimaces in pain. She has shrapnel in her spine, and her teenage cousin by her side is visibly shell-shocked.

Is this little boy the 226th Palestinian child to die here since the resumption of this high-intensity conflict? The 228th? Has this man’s young son been reduced to yet another statistic?

Meanwhile, fear permeates the eyes of Israeli children too. For a nation’s civilian population at large, daily life is disrupted by the threat of indiscriminate shelling and constant running to shelters. I look back at Fatima*, who had no shelter to run to, and who may never run or walk again.

The ICRC engages in discussion with ‘both parties’ about the ‘rules of war’. We talk about principles such as ‘precautions in attack’, ‘legitimate targets’, ‘concrete military advantage’ and ‘proportionality’. We remind everybody that if an attack is expected to cause ‘excessive incidental civilian casualties’ in relation to the concrete and direct military advantage anticipated, it must be cancelled or suspended. We say loudly and clearly that in this war, as in any other, it is not acceptable that soldiers minimize their risks at the expense of civilians on the other side. We also say it is not acceptable to use civilians as human shields, in any conflict. We attend diplomatic conferences, we organize workshops, we ‘raise awareness’ among belligerents to ‘minimize casualties’. How effective is all this?

In Gaza, we evacuate war-wounded patients and old people trapped in the rubble of what had been their homes only a few hours earlier. We visit prisoners captured in the combat zones. We repair electrical and water lines. Meanwhile hundreds of thousands of people are ordered to evacuate their homes in the middle of the night. What happens to those left behind who cannot flee? Where should they go? To overcrowded centres that may be bombed? To hospitals or medical emergency services that are not spared by either of the warring parties? To destroyed neighbourhoods where even Palestine Red Crescent ambulances are shot at? How many more Shujaiyas – a sea of rubble, previously home to almost 100,000 thousand people – does it take before everybody opens their eyes to the gravity of the situation?

By the side of a maimed father without a family anymore, of a little girl deprived of the future she is entitled to, I am overwhelmed by a sense of inadequacy.

The human cost is simply too high. Too many women and children are wounded, dying or damaged in their minds and bodies. This is not about who is to blame for not respecting this or that specific rule of war, or even about whether the expected military advantage outweighs the collateral damage. Academics, lawyers, NGOs, journalists and keyboard warriors will attend to those questions.

For us, at the ICRC, this is about stopping the inhumanity of this war. It’s about doing the right thing.

As an ICRC delegate, I simply raise my hand and say: “I am not just invoking the law now, I invoke the humanitarian imperative – stop the killing, stop the destruction.“