In recent months, tens of thousands of people have fled fighting in Aleppo Governorate for the relative safety of the Mediterranean coast, where most live in temporary shelters. In June, working closely with the Syrian Arab Red Crescent (SARC), the International Committee of the Red Cross (ICRC) has assisted over 450,000 people, including 160,000 displaced people in the coastal cities of Tartous and Lattakia.Over a million people have arrived in Lattakia and Tartous since the beginning of the conflict, swelling the local population by 50%. ICRC water engineer Patrick Luisier, who is based in Tartous, described the situation on the ground: “Local resources are severely stretched and the authorities are struggling to cope with the most recent influx of families fleeing Aleppo and other areas directly affected by the violence. Many families arrive here with very little, and living conditions in most shelters are difficult. It is now a priority for our assistance teams and those of the SARC to improve access to clean water, food and health care for these displaced communities.”The ICRC has stepped up its distributions of food, blankets, mattresses, cooking sets, and hygiene kits to 10 shelters along the coast, providing over 160,000 displaced people with much-needed assistance over the last six 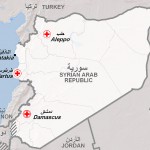 months. In Lattakia, the organization distributes food to a collective kitchen that serves hot meals for 8,000 people every month. ICRC and SARC engineers are also working to improve sanitation and the provision of clean water for over 15,000 people living in 10 shelters in Tartous and Lattakia.

The ICRC set up a logistics centre and warehouse in Tartous over a year ago, which has helped it to enhance its humanitarian response in northern Syria. Some 19,000 tonnes of food and other relief supplies, including medicines, are stored there. The organization dispatches aid from Tartous on a daily basis, both locally and to Aleppo and beyond. Over four million people across the region have benefited from these aid distributions.Medicines and decent health care are a priority for the displaced. In Tartous, where most of the displaced families live, two SARC mobile health clinics supported by the ICRC now treat over 2,000 patients a month. These SARC clinics are often the sole primary health-care providers for displaced men, women and children who live in shelters where chronic diseases are rife and medicines in short supply.On 26 June, after weeks of negotiation with all parties, the ICRC was able to deliver medical supplies from its Tartous warehouse to two Aleppo hospitals operating in both government- and opposition-controlled areas. As fighting continues unabated in the northern capital, the ICRC delivered enough supplies to treat at least 300 patients.

Syria is currently the ICRC’s largest operation worldwide in terms of financial resources. The organization maintains a permanent presence in Damascus, Aleppo and Tartous, with over 240 staff working in the country to distribute food and other essentials, to restore water supplies and to re-establish contact between people separated by the conflict.

In June, the ICRC worked closely with the Syrian Arab Red Crescent (SARC) to provide:

The ICRC worked closely with the SARC and local water boards to provide:

The ICRC worked closely with the SARC to provide: