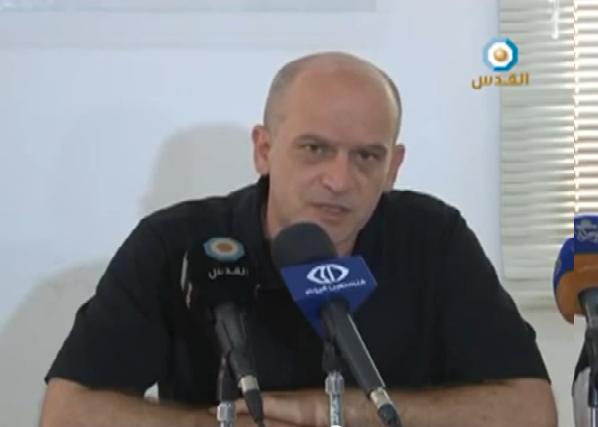 I’ve come many times to Gaza in the past 25 years, but I’ve never seen such devastation, so much destruction, so much blood, so much fear and tears in the eyes of the men, the women, the children.
My heart and the hearts of 140 Palestinians and foreigners and who are working here with me are full of grief for the people who have lost their lives.
The hour is grave, and we are coming here at a crucial time for Gaza.
I want to express the condolences of the ICRC for all the people who have died and who are dying as we speak.
I am also here to ask a question: who is responsible for the blood? Who is killing? Who has the power to stop the killing? I’m here to ask the Palestinian people with whom the ICRC has been working for the past 5o years all over the world, from Palestine to Kuwait, to the Magreb, the whole middle East, I’m going to ask them to open their eyes.

What we are facing as humanitarian operators is a very challenging, difficult time; all these discussions, all this communication, all these conferences about the respect of the Geneva Conventions, all this commitment by the states, by the parties to the conflict to respect the rules of law and humanity in war; I’m asking you where are they now? Where are those words now?
They are not in the tears of your people and of our people.
There is a lot of expectation from the humanitarian actors and from the ICRC in particular. Some people call on us to stop the war. Some people call on us to ask to stop the shelling of their houses. And we cannot do that. Many people are calling us to save them from the rubble of the shelling; and we are trying to do that. But we cannot succeed all the time, yet people look at the times we fail. This creates anger, the anger of the people under fire, the anger of people who want justice – and this anger is directed also at us. We are being asked to denounce.

We have been denouncing, we have been saying to everyone that there are rules in wars. We denounce the killing of civilians. We denounce the bombing of the Al Aqsa hospital. We denounce in the strongest possible terms the killing of our colleagues from the PRCS.
But what we are meant to do here is to try to save people in the given circumstances. So I’m telling you, Palestinian people, our brothers, you can criticize us for not being able to stop the war, to stop the shelling or to not be able to respond to all your expectations, but don’t be angry at us because we don’t try to do it. And don’t be angry at us because we don’t succeed in achieving important things for you. In the past few days alone, we have restored water for half a million people. We have brought more electricity in your homes. We have helped the ambulances evacuate hundreds, hundreds of people who otherwise would be dead now.
We are pressuring the Israelis in a confidential fashion to improve and ensure that there are no more women and children shedding their blood. And we are saving lives.

There can be no humanity and no humanitarian space if the people who hold the space do not respect it. In the last hours, two people have died who were very important to us, among others. These two people were trying to save lives and were killed. You want the ICRC to denounce? I’m denouncing now. I’m denouncing the deliberate killing of our two brothers while they were trying to save lives.
I’m denouncing on behalf of the ICRC all attacks against humanitarian workers, journalists, civilians, workers. I want to say to the Palestinian people: don’t direct your anger at the wrong place. Some people are trying to divert your anger towards us. But we are also victims here. Humanity is a victim here.
People say ICRC is neutral. We say we are neutral. Today, in Gaza, I’m saying that we will be neutral when it comes to politics. But we will never be neutral when it comes to choosing our side, and our our side is that of the victims. I will finish by saying to the Palestinian people to open their eyes and see who is responsible. Should you be angry at those who are shooting or at those who are trying to help you?
You always hear from us that we call the parties to respect the laws of war. We will continue doing this until the war ceases. But today I’m asking the Palestinian people, the mothers, the fathers, the Imams, the journalists, to respect our work, to help us help you. We are in this together, we are losing sons and brothers.
I wish we could have a feast in better circumstances. And I have known the Palestinian people for over 35 years now. And I know you are strong people and that in this testing hour you will know who is your friend and who is your family. Today there is a lot of despair and sorrow. I also know that you are capable of hope. We want to be part of that hope.

Let’s talk about the evacuations first. Our policy is very clear. It is written down in the laws of war as they exist today and as they have been forged during thousands of years: civilians must be spared and protected. That means that nobody should endanger them, and no matter what, they should not be targeted.
So we are not in the business of evacuating civilians from their homes. We are in the business of ensuring that they are protected in their homes. When there are cases like a sick or injured person or a pregnant woman, we evacuate. And we have been doing so for hundreds of people over the past days. But we will not be part of the process that we move the population from their homes, to facilitate a military operation, or to continue to have them in the line of fire. And the situation in Gaza where military targets and civilians are so close the one to another does not exonerate the parties from their responsibilities.

What is coordination? It is about asking both parties to ensure that the people who need help can be reached and can be taken out from a given place, or that a service can be provided in a given place. It is an effort to get from both parties the commitment that they are going to respect an ambulance or a humanitarian access.
If people say no, what can we do? And if they say yes, and then they betray their very words, what can we do?
This is what has happened yesterday. We coordinated to go to one place, and we paid the price of blood. And we do not accept to be accused of being responsible for the death of our own. So when it comes to coordination, again, look at who is responsible. We are responsible for doing the best we can, but we cannot be held responsible if somebody shoots at us.
I want to inform the Palestinian people that there are people who are spreading false rumours against the ICRC. Some people are calling hospitals, municipalities, schools, saying that they belong to the ICRC and are spreading false information about evacuations.
This is completely false. You should not trust everybody who says they are from the ICRC and you should be aware that there are people who do want to harm the ICRC.