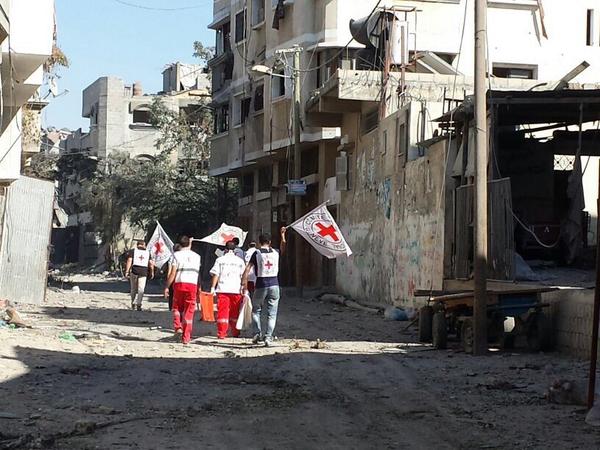 Humanitarian groups such as mine, the ICRC, working in Gaza do their utmost to help but only politicians can end the conflict. OP-ED by Head of delegation, Jacques de Maio

Three International Committee of the Red Cross (ICRC) vehicles are leaving Shujaia. They have rescued 11 people from the rubble but the intense combat has forced them back. As they depart an angry crowd of Palestinians attacks the vehicles with stones and sticks. “You are useless,” the crowd shouts. “You must protect us.”

But we cannot. The anger is unpleasant and misplaced, but understandable. We do our utmost, risking the lives of our staff to rescue who we can, but we cannot end the conflict.

As ever, humanitarian organisations are a sticking plaster, not the solution.

If your home in Gaza was being shelled, who would you call in desperation? On the night Israel’s ground offensive began, intense fire struck north-east Gaza. The emergency services, including our partners at the Palestinian Red

Many Gazans tried to phone us. Our office switchboard couldn’t cope. In the dark violent hours of the night we could not send ambulances, restore the water supply or treat the injured dying of their wounds. Isolated and terrified, with nowhere to flee and no help in sight, Palestinian families grew ever more angry.

Two nights later in Shujaia hundreds more families went through the same ordeal. Again, ICRC staff and PRCS volunteers could do little. With no guarantees of safety it would have been folly to attempt a rescue. In the daylight a temporary ceasefire was agreed, at our request. It was quickly broken, but nevertheless several dozen injured were brought from their ruined homes to hospitals and hundreds took advantage of our presence on the spot to flee. It was little and late. No wonder the helpless families have accused us of callous disregard. When your one faint hope of help is snuffed out the intensity of disappointment is all the deeper.

Other accusations have been levelled. We were charged with collaborating with the Israeli Defence Forces in the destruction of Wafa hospital. In truth, we sought to protect the hospital through our dialogue with both sides. When combat came perilously close we intervened to win time for a last-resort evacuation of gravely ill patients, many on life support.

We are upbraided for not taking sides and refusing to apportion blame. Given our strict political neutrality it is usual that we get criticised by all sides at different times. But the ICRC is not silent in the face of clear breaches of international law. We explicitly and loudly condemned thedirect shelling of the Al Aqsa hospital on Monday that killed at least four people. We clearly denounce the indiscriminate rocketing of Israel. We stated categorically that even in the midst of warfare, people must be able to receive medical care in safety.

We are horrified at the death toll. We have repeatedly called for both sides to protect and spare civilians. We have warned of the need to protect Gaza’s perilously fragile water supply – many residents of the densely populated area are now without water, at the height of the scorching hot Mediterranean summer. Today our priority is the civilians in Beit Hanoun and many other places all over Gaza. We call on all sides, based on the humanitarian imperatives of the situation, to ensure that their combat operations be conducted in accordance with the fundamental principles of international laws protecting civilians.

But will our pleas for restraint, and the constant efforts of almost 140 staff and more than 400 PRCS teams to rescue civilians and restock hospitals, be enough to quell the anger of grieving families? We hope so but we realise that it might not.

We do ask one thing: understand the limits of our role and look to the politicians to end this deadly, miserable conflict.