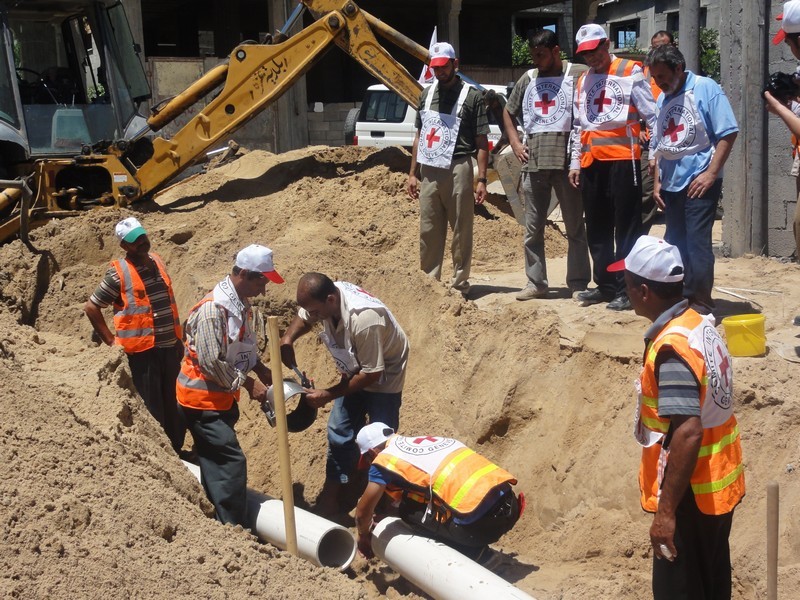 Repeated bombing is devastating Gaza’s fragile water infrastructure, while the deaths of several municipal water technicians highlight the danger they face in carrying out vital maintenance.

“Hundreds of thousands of people in Gaza are now without water. Within days, the entire population of the Strip may be desperately short of water,” according to Jacques de Maio, head of the ICRC delegation in Israel and the occupied territories.

“Water and electrical services are also affected  as a result of the current hostilities. If they do not stop,  the question is not if but when an already beleaguered population will face an acute water crisis,” he added.

Hospitals, refugee camps, schools, and homes all need water and electricity in order to function, but recent attacks have put water and electrical systems out of action. To make matters worse, the intensified fighting is preventing technicians from carrying out essential repairs. Following the deaths of several municipal water technicians over the past few days, Gaza’s water service provider has suspended all field operations until the safety of its staff can be guaranteed.

As a result, hundreds of thousands more people will soon find there is no water when they turn on the tap.

“Gaza’s water system has been deteriorating for years. The latest attacks are the last straw. Safe drinking water is becoming increasingly scarce in the Strip, just as temperatures are soaring. Water is becoming contaminated and sewage is overflowing, bringing a serious risk of disease,” said ICRC water and sanitation expert Guillaume Pierrehumbert. “In recent days, ICRC teams have helped the authorities conduct essential emergency repairs to water and sanitation infrastructure in Gaza, improving the situation for over 90,000 people, but bolder action is urgently required.”

Under international humanitarian law, the parties to a conflict must distinguish between military objectives and civilian objects and between combatants and civilians. They must also avoid harmin civilians or civilian objects, and protect them from the effects of military operations. This includes protecting water technicians, water networks and electrical supply systems.