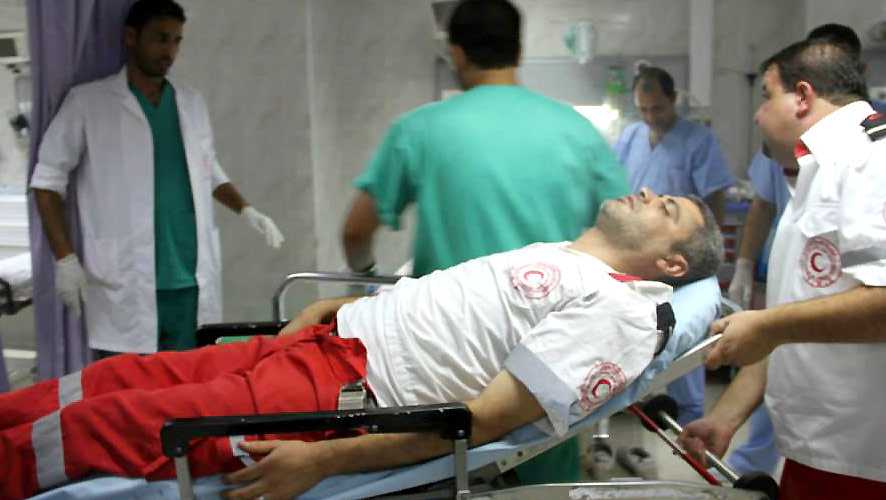 A Palestinian Red Crescent Society paramedic injured at the jabalyia station, along with other staff and volunteers, receives medical attention in hospital in Gaza. © PRCS

The International Committee of the Red Cross (ICRC) calls on all sides to protect civilians and medical workers caught in the midst of the escalating conflict.

The ICRC deplores outright the casualties and the damage caused at the Palestine Red Crescent branch in Jabaliya, northern Gaza on 9 July when a dozen staff and volunteers were wounded and three ambulances destroyed.

“The human impact of this vicious circle of armed violence is worsening by the hour,” said Jacques de Maio, head of the ICRC delegation in Israel and the occupied territories. “Civilians must be protected. In all cases, ambulances, hospitals and medical workers must be ensured the conditions of safety they require to carry out their vital work.”

As the number of casualties continues to grow, with dozens reported killed and hundreds injured, the ICRC is working around the clock in close coordination with the Palestine Red Crescent Society and the Magen David Adom to ensure a swift response to medical and other needs. The ICRC has adapted its operational setup, its capacity for action and its security measures to ensure that it is able to meet humanitarian needs arising from the intensification of hostilities.

The ICRC’s dialogue with Israeli and Palestinian authorities has also been stepped up. At the heart of international humanitarian law – also known as the law of war – lies the distinction that must be made between civilians and those directly participating in hostilities. A clear line must be drawn between military objectives and civilian objects. The ICRC stresses that the parties are obliged to take all feasible precautions to spare the civilian population from the effects of hostilities. The law prohibits all attacks against civilians and civilian objects.