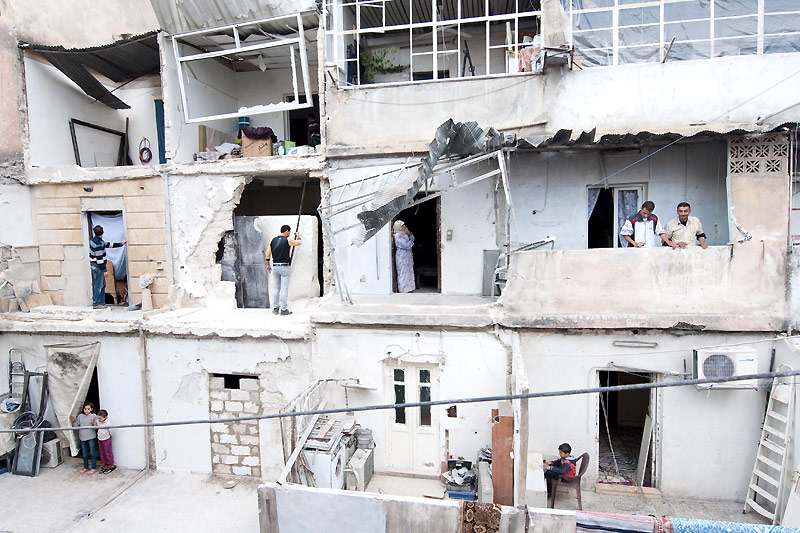 TThe facade of this building in Aleppo collapsed following shelling. Residents make the most of what's left, with each apartment telling a unique story. / CC BY-NC-ND / ICRC / H. Hvanesian

In March and April, the delivery of water, food and other aid items to people affected by the conflict continued to be a major challenge. Amid ongoing hostilities, the ICRC assisted over 900,000 people across the country, working closely with the Syrian Arab Red Crescent (SARC).

“The SARC’s presence in both Government and opposition-controlled areas, its proximity to affected populations, the dedication of its staff and volunteers and their deep knowledge of the terrain allow the ICRC to deliver aid even in the most challenging environments,” said Daphnée Maret, deputy head of the ICRC delegation who coordinates assistance programmes in Syria.

Food and other aid items remain central to today’s ICRC emergency response, but close coordination with local actors like the SARC is more than ever needed to operate and deliver in areas where the organization does not yet have a permanent presence.

“How we coordinate with SARC headquarters and its local branches determines to a great extent our ability to assist people,” explained Ms Maret. “By working closely with SARC at a local level, we can better understand the landscape and the needs.”

A typical assistance operation requires an assessment of the needs, negotiating the necessary authorizations, an up-to-date evaluation of the security situation and, lastly, the deployment of multi-truck convoys that need to pass through numerous checkpoints to reach their destinations.
“Close cooperation means well-coordinated and effective assistance to people directly affected by the conflict,” said Firas al Nakeeb, the SARC’s Damascus-based field coordinator. “The ICRC supports us by virtue of its long experience working in armed conflicts worldwide and we in turn provide it with our understanding of local needs and dynamics.”

Syria is the ICRC’s largest operation in terms of financial resources, and is present in Damascus, Aleppo and Tartous. Over 240 staff work in the country, distributing food and other essentials, restoring water supplies and re-establishing contact between people separated by the conflict.

In March and April, the ICRC supplied food to over 900,000 people in ten governorates, including Damascus, Rural Damascus, Homs and Deir Ez Zor. The vast majority of beneficiaries were internally displaced persons (IDPs). Nearly 12,000 people living in shelters in Homs and Damascus received daily meals through collective kitchens supported by the SARC and supplied by the ICRC. Over 180,000 other people displaced by the fighting received essential household items such as hygiene kits, blankets, mattresses and kitchen sets.

The ICRC worked closely with the SARC and local water boards to provide: 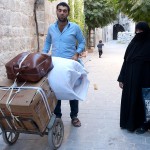 Old city, Aleppo, A man leavs his home with a few belongings in search of a safer place. / CC BY-NC-ND / ICRC / H. Hvanesian

The ICRC worked closely with the SARC to provide: 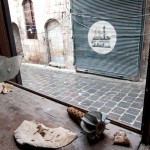