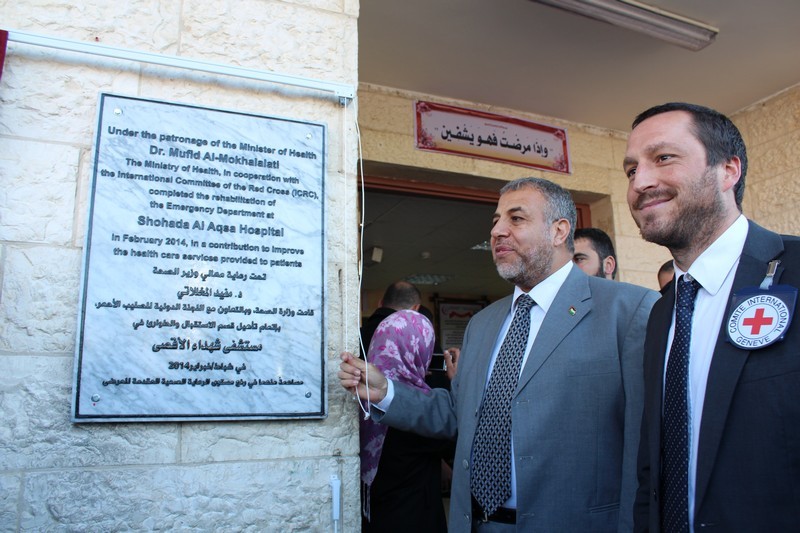 Today, around 55,000 patients per month are benefiting from improved emergency services.

“People in Gaza need reliable, effective emergency medical services. The ICRC contribution has been to improve the facilities and strengthen the emergency treatment,” said Mr. Christian Cardon, the head of the ICRC in Gaza.

The project started at Al Shifa hospital in 2010, first focusing on the renovation of the emergency department in this and four other hospitals. Hospitals also redesigned their triage systems, improving patient flow in order to ease access and movement of patients undergoing treatment. In total, 335 nurses and 159 doctors received training.

Working with the local Ministry of Health, the ICRC contributed to the expansion of the available space, rehabilitating essential infrastructure such as electricity, water and sanitation, installing new medical gas systems, modifying the lighting and constructing new medical storage areas.

Integrated communications in times of urgency are also vital. “We’ve been installing a pre-alert call system between the Palestinian Red Crescent Society, the Ministry of Health, the civil defence, the Emergency Medical Services and the emergency departments at all government hospitals to improve overall service and readiness in case of emergencies,” said ICRC health officer Ms. Sanaa Rajab.

Between now and 2016, the ICRC will work with the health authorities to provide an Emergency Trauma Course for doctors and nurses at three major trauma centres in Gaza (Shifa, Nasser and European Gaza Hospital) to continue to strengthen the overall emergency system and the quality of care.

In 2013, ICRC contributed to the management of 194,873 hospital admissions cases, 40,519 surgical interventions and 480  hemodialysis patients in the Gaza strip, while maintaining ICRC’s capacity to respond to health emergency. This included support to 13 Ministry of Health-hospitals – totalizing 2,097 beds with 141 tonnes of emergency drugs and disposables , biomedical spare parts and preventative maintenance kits (heamodyalisis and medical gases) and generators spare parts. Similar support will continue in 2014.

The organization also provided rehabilitation services to 2,500 patients through its support to the Artificial Limb and Polio Centre in the Gaza strip.It also provided the Palestine Red Crescent with financial support for its emergency medical services, which operate throughout the Palestinian territory.