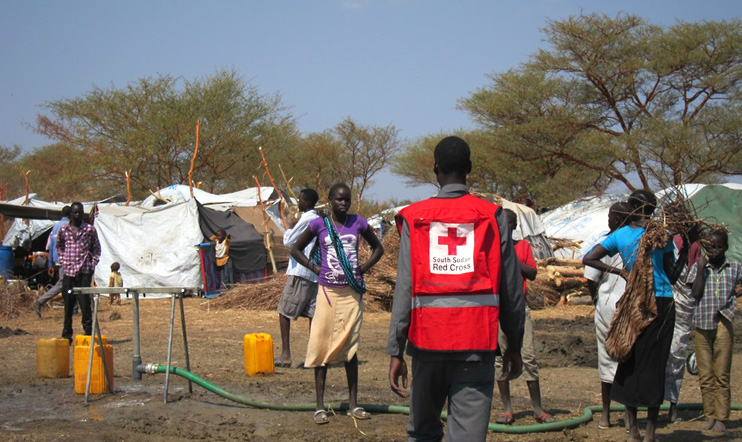 People displaced by the violence gather by a water point in a camp in Bentiu. The ICRC and the South Sudan Red Cross are supporting water points like this one to ensure access to safe drinking water. ©ICRC

Thousands of people have been displaced by renewed fighting in Unity state over the past week. The International Committee of the Red Cross (ICRC) and the South Sudan Red Cross are responding to the needs of displaced people in Leer, where thousands of civilians have fled armed clashes and other violence.

To help treat the sick and the wounded, the ICRC has sent a surgical team to Leer and has also donated medical equipment. It is coordinating its actions with those of the South Sudan Red Cross (SSRC) to deliver aid to the displaced as efficiently as possible.

“Many women and children have been taking refuge wherever they can find it,” said Jerome Imstepf, who is in charge of the ICRC’s operations in Unity state. “Because the situation in this state is so volatile, we don’t know what it will be like tomorrow. But the ICRC and the SSRC will do everything we can to help the people affected by the fighting here.”

“We are particularly concerned about access to health care,” he added. “We are reminding all parties to the conflict that civilians must be protected from attack, and that people must be allowed safe access to medical treatment.”

Even before the latest clashes, ICRC surgeons based in Bentiu, the capital of Unity state, had performed over 75 operations on people wounded in the fighting, and the organization was providing clean drinking water for over 3,000 displaced people.

Since the beginning of the crisis, the ICRC has:

The ICRC is scaling up its work in various areas of South Sudan. Together with the South Sudan Red Cross, it will take further action as the security situation permits.