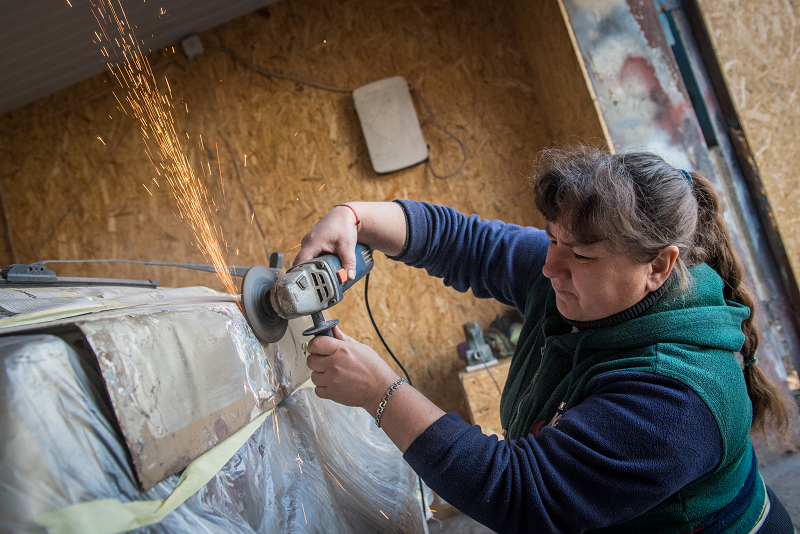 The week of the International Women’s Day, marked every year on March 8, the ICRC delegation in Ukraine made a series of social media posts dedicated to women in the conflict zone, namely women, who have extraordinary vocations and inspire others. Elena Viktorovna from Lutugino village close to Lugansk was the first in the spotlight.

“Having visited Elena just once, you want to come back again,” her neighbours and friends say. Everyone in the town knows her; she has the uncanny ability to lifts one’s spirits and spread positive energy around her. Despite having health problems and being in a wheelchair, she helps others. She is always open to talk. Elena embroiders with beads, knits and sews clothes, and gives her creations to children and adults. Besides, she makes puppets for the puppet theater in the local library; she brings to life heroes from children’s favourite books. Elena lives on her own, but her doors are always open to those who need support and warm company. 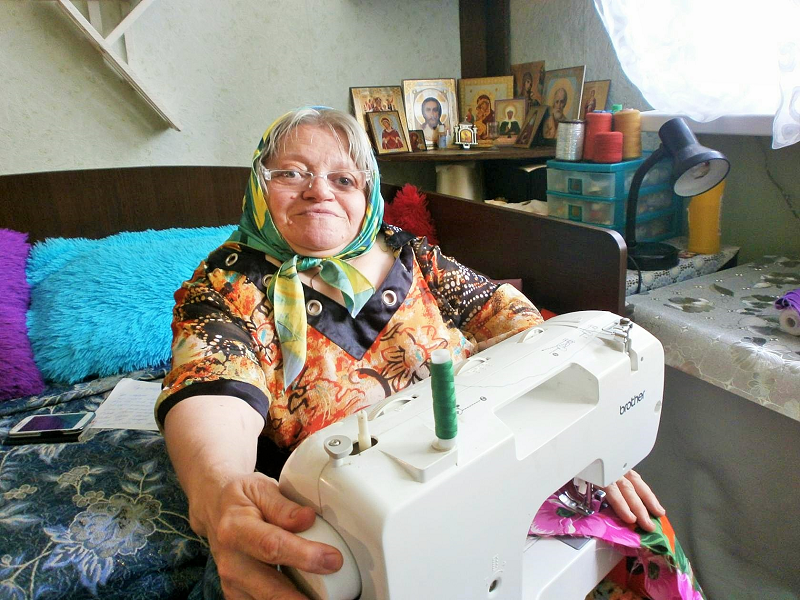 Anna volunteers with the Ukrainian Red Cross Society. She works at the ICRC heating point at Stanytsia Luhanska – the only pedestrian crossing point out of the official five. Every day, around 10,000 people cross the line of contact through that entry-exit crossing point, and many of them use the heating point. 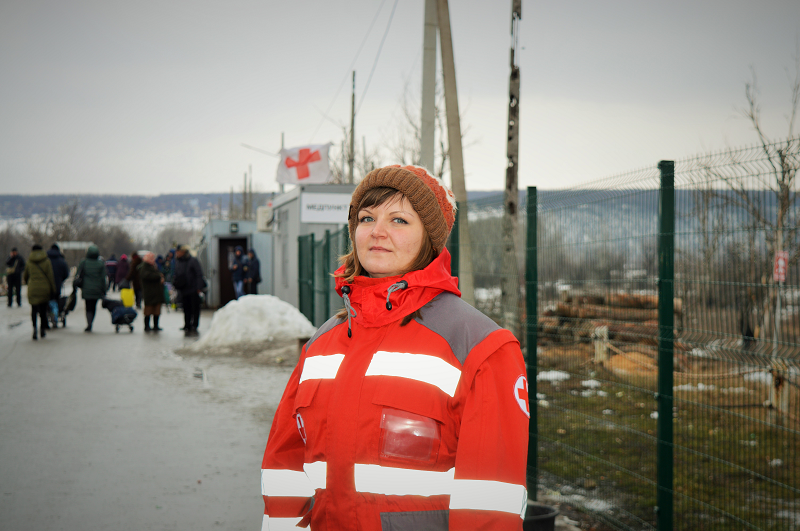 “We start the day by lighting up the wood stoves and bringing water for tea. Every day, we distribute about 1500 cups of tea, so we have to go down to the water pump to fetch the water eight times a day. Our most important duty is to give first aid to the people, who started to feel unwell during the crossing. Among them, there are people in a wheelchair, whom we have to help move in any weather conditions,” recounts Anna. Apart from providing a measure of comfort at the heating point and the first aid, often, the volunteers find themselves encouraging people with supportive words or advice. After all, life in the conflict zone and the crossing is a difficult undertaking for the majority of them. Hence, the work of volunteers is taxing, both physically and psychologically. However, no matter how difficult it is to come face to face with the pain of the people whom she helps, this young woman always has a smile or kind words to offer them. 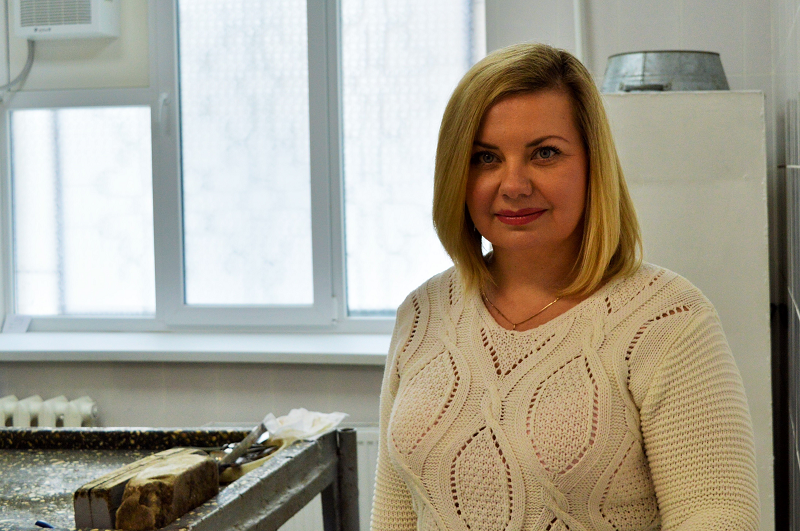 Meet Elena, who is our next hero and has an uncommon profession. She is the head of a medico-legal bureau in the city of Debaltsevo. This pleasant lady assumed the head position at the morgue in the beginning of 2015, right after the end of active fighting in the city. Elena, then working in the city of Enakievo, was sent to give an extra hand to a team of medico-legal experts. Leaving for the trip, she was convinced it was going to be a temporary mission. And there she is, four years later, the only medico-legal expert in Dbaltsevo. “Our team is one of the reasons I stayed,” says Elena. It is a small team, composed only of women. Alya, Irina and Elena, who are sisters – that’s it. A small, tightly knit team, never losing optimism. The ICRC has worked with Elena for several years, supporting her team.

“In my family, everyone is a shoemaker, women as well as men. Since childhood, I remember the smell of the workshop. At first, I did not want to continue this family vocation. Then I met my husband, and he turned out to be a shoemaker! In 2003, we built a kiosk and started to work together: while I received the clients and sew, he took on the more difficult work, requiring physical strength. It’s already been 15 years that I work in the same place, but now I do all the work by myself,” told the shoemaker family saga Victoria from Avdiivka in the Donetsk region. 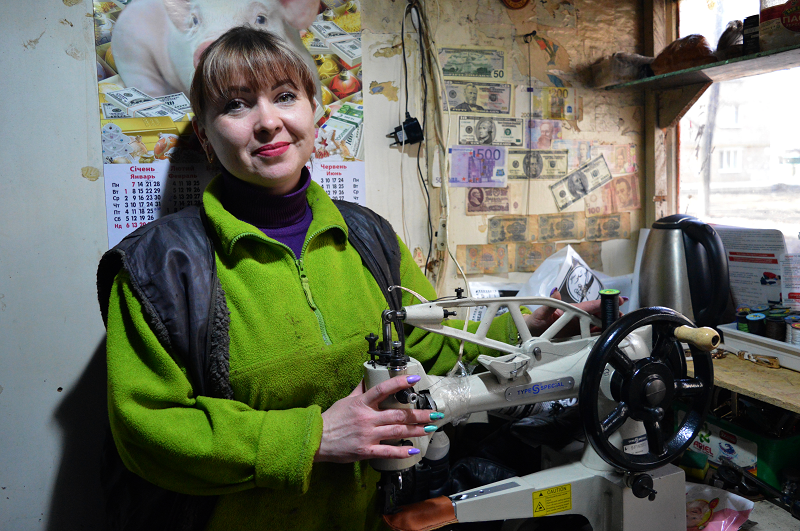 Since the beginning of the conflict, the woman did not close the shoe repair shop, even when there was shelling nearby. Still, in 2015, she was forced to leave Avdiivka with her family, as it was caught amidst hostilities. One year later, Victoria came back with her children and consequently received our grant for developing her business: “Even if rocks fall from the sky, I will stay here.”

Inna from the city of Marinka has been painting and fixing cars for twenty years already. Even though her car repair is next to the line of contact, car owners from surrounding villages and towns come to her for help. Inna recalls with a smile the surprised reactions of her first clients when they realized their car would be repaired by a woman: “Many said it was not women’s work. But then, when they saw the result, even the sceptic ones changed their point of view, and became my permanent clients.” 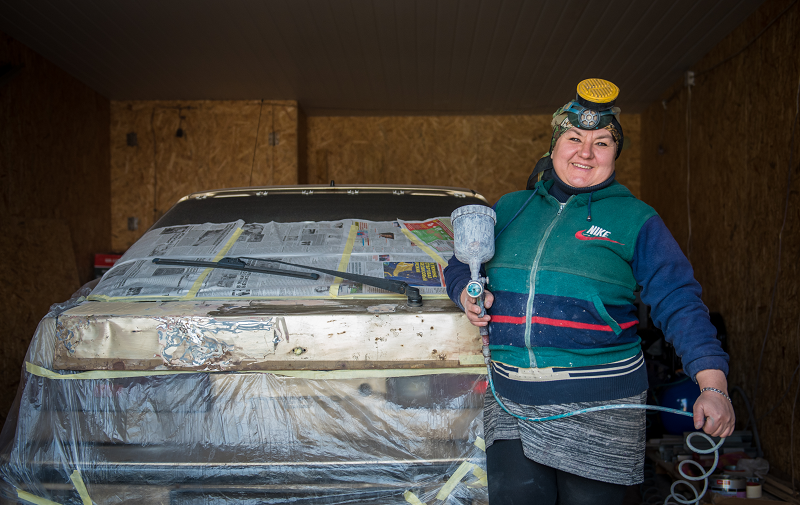 Inna has had to change profession numerous times: she worked as a cashier, as well as a kindergarten teacher. Nonetheless, her current vocation appears closest to her heart. As a well-practiced specialist, this woman could easily find work beyond the conflict-affected region. However, she does not want to leave her native Marinka. “Many elderly people live here. Often, they use old cars, which make their life easier. Who else would take care of their metal horses?”