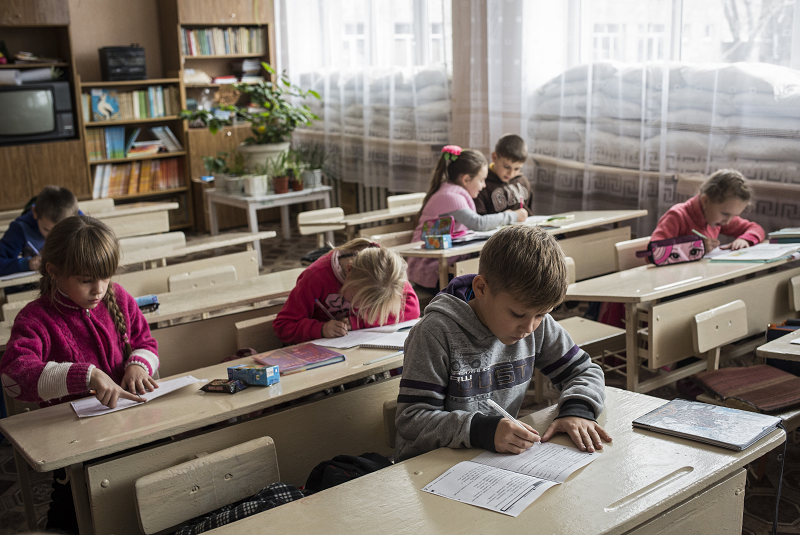 Kyiv (ICRC) – The International Committee of the Red Cross (ICRC) is appalled by recent incidents in which two schools in the Donetsk oblast on both sides of the line of contact were shelled and damaged during the recent upsurge in hostilities.

On 16 and 17 May, a school in the village of Sakhanka came under shelling; the school canteen was hit and the pupils had to hide in the basement. The school has been regularly assisted by the ICRC for the last two years.

School No. 11 in Svitlodarsk was also shelled while pupils were in class, damaging windows and several walls. The support previously provided by the ICRC, notably installation of protective film for windows, helped prevent those windows from shattering. Fortunately, no pupils or teachers were injured in either incident.

“Attacking schools and other civilian educational institutions is prohibited under international humanitarian law. They simply cannot be considered a legitimate military target, and must be respected with all due diligence” said Alain Aeschlimann, Head of the ICRC Delegation in Ukraine.

“Far too many children are already paying a high price by living in the conflict zone. Their lives and wellbeing should be protected, not put in jeopardy,” he said. “We reiterate our call to all parties concerned to respect international humanitarian law and refrain from attacking schools and other civilian objects.”

Over the past four years, dozens of schools, kindergartens and other educational institutions in eastern Ukraine have been affected by the armed conflict, with some directly damaged by shelling and shootings.

For many children, the daily journey to school also comes with unnecessary dangers, while parents are forced to make an agonizing choice between putting their children at risk and denying them education.

The situation has led the ICRC in Ukraine to develop the “Safer Schools Programme”, which aims to reduce the risks faced by children in the conflict zone.

On 17 May, the Donetsk Filtration Station (DFS) also came under shelling. On several occasions the DFS and its workers have been directly hit, leading to halts in the station’s operations and cuts to the water supply for large swathes of the local population.

“Safeguarding civilian infrastructure that provides essential services – and those working to maintain it – is another cornerstone of international humanitarian law. All parties concerned must respect the civilian purpose of critical infrastructure and services,” Mr. Aeschlimann said.