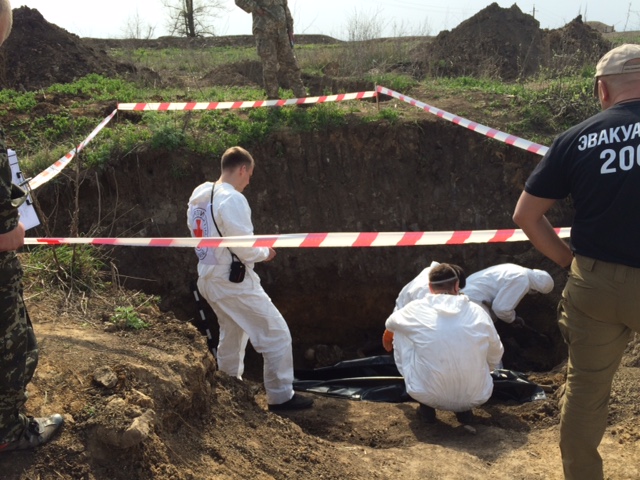 On 25 – 26 July, 20 operational workers / team leaders involved in the search and recovery of human remains in Ukraine participated to the workshop on Collection of Information on Possible Burial Locations and Grave Site Mapping organized by the ICRC. In June only, the ICRC has participated to two exhumation operations in eastern Ukraine. When people die during armed conflicts, their bodies must be managed respectfully and with dignity. The remains of individuals must be found, recovered, documented, identified and properly buried. Maria Dolores Morcillo Mendez, ICRC forensic expert, talks about forensic activities in Ukraine.

Why is the field of forensics important?
Unfortunately, given the circumstances, during and after an armed conflict, the remains of people who died in the course of hostilities are not always handled in a proper way with due dignity and respect. It is definitely a humanitarian concern: the importance of the dead for the families, for the communities, is absolute and beyond discussion.

Because of security constraints, like mines or continued shelling, dead bodies are sometimes left unburied on the battlefield. Even when they are actually collected from the battlefield, there should often be more efforts to identify them or at least to bury them in a way which would ensure their identification at a later stage. This is where the forensic expertise is highly needed.

What is the scope of the problems in this context?
During times of conflict, the handling of the dead is a particularly challenging task which usually requires expertise and existing procedures to be adjusted as well as a system of coordination amongst relevant professional, investigative and military structures. As we see in other countries, some imperfection of the forensic procedures impacts negatively the identification results which might cause mistrust of the families, who then do not believe in results provided to them. A large number of bodies still remain not found and unidentified. That means many people still do not have certainty about the fate of their loved ones. Forensic activity is also part of a broader effort to shed light on the fate of persons reported missing. And families have a right to know what happened to their family members.

What is the proper A-Z process of working with the body?
Forensic process involves different phases. To make it short, the initial step is to search for bodies and recover them. Proper examination and collection of data allowing identification (as clothes or identification tag worn at the moment of the death, specific aspect of the dentition and skeleton, etc.) and DNA samples should take place. In addition to procedures on the bodies, information and DNA reference samples from relatives of missing persons should also be collected. All this, called post-mortem and ante-mortem information, needs to be compared and reconciled in order to achieve an identification. It is important to remember that the DNA analysis is not the panacea, but only one of the tools of identification to be used in an integrated manner together with all the other information. Once the bodies are identified, they can be returned to their families for final burial. All stages should be realized in close coordination between the relevant institutions.

What can help in identifying the body?
The identification of a dead body depends very much on the quality and the quantity of information collected since the very moment the body is found. If you miss something at the very first stage, you will not have the chance to get it back. Every detail is important, every object found together with the body should be inspected and recorded in writing, as it can lead or at least facilitate the identification. It also depends on collection of quality information on the person when alive that is obtained from relatives. Finally it depends on availability of this information and that is why standardization and centralization of data are key elements in the identification process. Over years, best international practices were identified and recorded. And it is key that such best practices be widely shared and disseminated, particularly in conflicts which recently erupted.

What are the main challenges of the management of the dead in Ukrainian conflict?
The ICRC lauds the efforts of authorities and all entities concerned in addressing this issue in general, and in particular in the collection and examination of the deceased. However, given the large scale of events and number of victims, structures are overwhelmed and there is still a room for a much more integrated approach and better coordination between a number of institutions dealing with the issues of dead and missing. Another important aspect is the exchange of information between all sides involved in order to successfully accomplish the process of identification, and return the body to the family. The ICRC has worldwide experience in facilitating coordination and exchange of information required for identification and we stand ready to support all involved here with our experience and expertise. 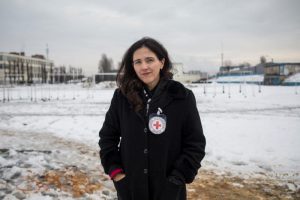 What are the challenges faced by forensic staff?
People working on forensic issues often stay unseen, while in a way they are the ones responsible for fates of the bodies. The teams, which retrieve the dead bodies, often work amidst hostilities and in stress situations. Forensic practitioners and investigators are given high level responsibility and sustain psychological pressure. Forensics deal with the most traumatic consequences of the conflict. Their work should be acknowledged, while necessary resources should be allocated for this important task.

What is the role of the ICRC Forensics in Ukraine?
Our team provides advice and support to authorities and forensic practitioners in searching for, recovering, analysing and identifying the dead and those in charge of collection of information from relatives of the missing. We also provide training to help improve forensic procedures up to the best international standards.We also participate to the exhumation operations upon request to advise relevant bodies on the process and contribute to raising the capacity of morgues by providing rehabilitation works and donation of necessary equipment. We are also ready to act as a neutral intermediary between the concerned sides as for example by transferring mortal remains or DNA samples.

Are there any rules that regulate the management of the dead?
In addition to local legal framework on forensic and missing, International Humanitarian law, applicable in Ukraine, requires that the concerned parties protect the dignity of the dead. The law also says that parties must prevent their despoliation and desecration and do everything possible to search, collect and document the dead and, where possible, identify them. International Humanitarian Law also contains a norm whereby the remains of people who have died during armed conflict must be handled with dignity and properly managed.