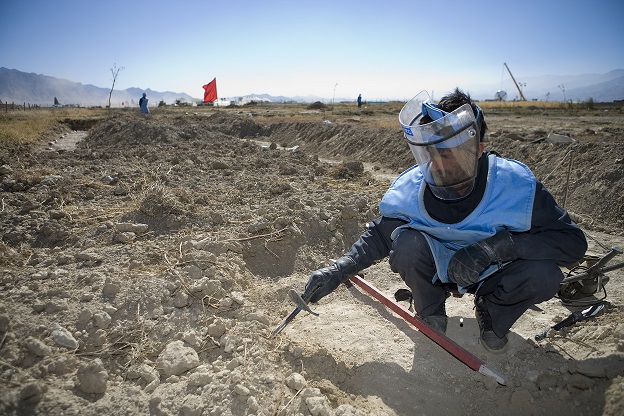 Renewed political commitment to implementing the Anti-Personnel Mine Ban Convention (APMBC) and an ambitious action plan that maps out the road towards a mine-free world by 2025 – these were the main outcomes from when the 164 States Parties to the Convention met in Oslo last month.

The last week of November was a busy week for all those involved in the global fight to end suffering caused by anti-personnel landmines worldwide, including for me as President of the APMBC. Every five years, the States who have outlawed anti-personnel mines through the Mine Ban Convention meet for a review conference to take stock of their progress and agree on the way forward for the next five years. This year, more than 600 representatives from the 164 States Parties to the Convention, civil society, international organizations and even quite a few States who have not yet acceded to the Mine Ban Convention gathered in Oslo.

The Mine Ban Convention has been a great success. Each mine that is removed from the ground or destroyed from a stockpile represents a potential life or limb saved. In the 20 years since the Convention came into force, more than 58 million mines have been cleared or destroyed. This is what we call ‘life-saving progress’.

In Oslo, States Parties were clear: We have much to be proud of, but the job is far from over. Sixty million people worldwide still live with the risk of landmines on a daily basis. Thirty-two States Parties still have landmine contamination, and an obligation to clear their land in line with the Convention. Many States have a responsibility to mine victims and survivors who need support to be full and equal parts of their societies. In recent years, renewed use of anti-personnel mines by non-state armed actors in ongoing conflicts has compounded the challenge. As a result, the number of people who fall victim to these indiscriminate and illegal weapons has remained high in recent years. This is a call to action for all States Parties to the Mine Ban Convention.

Looking ahead: The Oslo Action Plan

At the last Review Conference in Maputo, Mozambique, five years ago, States Parties agreed to a goal of working towards a mine-free world by 2025. To paraphrase Norway’s Minister of Foreign Affairs, Ine Eriksen Søreide, who spoke during the Review Conference, the 2025 goal is “ambitious, but not impossible”.

In Oslo, the States Parties adopted the Oslo Action Plan, where they agreed to intensify their efforts to implement their obligations under the Mine Ban Convention. The Oslo Action Plan sets out 50 concrete actions they will take over the next five years in order make tangible progress towards ending the suffering caused by anti-personnel mines. It is an ambitious plan that I believe will give new energy to the implementation of the Mine Ban Convention, ultimately making a significant difference in protecting people and responding to the diverse needs of affected people, be they girls, boys, women or men.

In the Oslo Action Plan, States agree that it is necessary to increase the pace of survey and clearance of mined areas in the next five years. Under the new action plan, all countries will precisely identify mined areas and put in place national plans for mine clearance in accordance with international standards within the next two years.  The Oslo Action Plan also confirms and emphasizes that all the obligations of the Mine Ban Convention also apply to anti-personnel mines of an improvised nature – meaning that such mines must be reported, surveyed and cleared just like any other anti-personnel mine. States Parties also agreed to spare no effort to universalize the Convention and the norm against any use of anti-personnel mines.

In recent years, large new groups of refugees and internally displaced persons have found themselves among those at risk from anti-personnel mines. In response, the Oslo Action Plan contains a whole new chapter on mine risk education.  States Parties will strive to provide targeted mine risk education for everyone living in affected areas. This will contribute to reducing the number of new mine accidents and help people protect themselves from explosive risks.

Even if we reach our goal of a mine-free world, mine victims and survivors will still need support and attention for many years to come. The Oslo Action Plan therefore contains several concrete actions States will take in order to ensure that people who have been injured by mines have access to healthcare and other services they need to be able to live independently and in dignity.

Taking stock: great success, but much remains to be done

Throughout this post, I have been referring to the diverse needs of people affected and how we may need to respond to children, women and men in different ways. This is important, as we have learned that to be effective, mine action and victim assistance need to consider the different needs, experiences and risks that people face, many of which vary according to gender, age and disability for example. The Oslo Action Plan mainstreams gender and other diverse needs through all parts of the implementation of the Convention, and this is something I strongly believe will help us become more effective in the years to come.

We all know that resources are key to reaching our shared goal of a mine-free world. Through 20 years of implementation, we also know that strong national leadership, evidence-based plans and dialogue between all relevant stakeholders in a mine-affected country are key ingredients to success in mine action. The Oslo Action Plan encourages the use of all these ingredients and States Parties will also explore new and innovative sources of financing.  With only six years remaining before their aspirational 2025 deadline, these actions will be of great importance.

Finally, the Oslo Action Plan introduces a whole new level of accountability through the inclusion of indicators for each action. States Parties will now be able to track their progress from year to year.

The Oslo Action Plan will be an important tool on the road to a mine-free world over the next five years. Priority number one will now be to ensure that no time is lost in implementing the plan. Renewed political commitment to the Mine Ban Convention and strong partnerships with civil society, the UN and other international organizations is vital to realizing the States Parties’ common goal of a mine-free world where survivors and victims are full and equal participants in society. The Oslo Review Conference allowed States and organizations alike to pledge their political commitment to the Convention. That is an important starting point for all of us to step up our efforts to implement the Convention over the next five years in line with the Oslo Action Plan.