Earlier this year Hugo Slim penned a blog post with the important call to begin a conversation about masculinity and war. Slim’s post introduced the core problem around masculinity and war: that men are overwhelmingly implicated as the perpetrators of war and other forms of armed violence. While this is a timely and necessary contribution, we can also learn from the contributions made by sociologist and political scientists over the past 30 years (for summaries and bibliographies of this work see here, here and here). With that in mind I thought it would be an opportune time to outline some of the most impactful recent work which has been done on the question of masculinity and war. I think there are two supplementary questions about masculinity and war which have particular capacity to enrich Slim’s original post. The first is the question of which masculinities make war possible? And the second is which wars do particular forms of masculinity produce?

Which kind of masculinities?

It is right to highlight that the practices and attitudes of men are at the heart of war. But, not all men and not all constructions of masculinity condone militarism or armed violence. While the forms of masculinity that are idealised on military institutions may frame war as the ultimate expression of manhood, corporate business-class forms of masculinity may instead focus on financial accumulation or technical skill. Due to the range of ways that masculinity manifests researchers have suggested that it is necessary to shift from talking about masculinity as a singular phenomenon to the plural of masculinities.

The framework of ‘masculinities’ suggests that there are a multitude of mutually accepted ways to be a man, and that in any given social context these ways to be a man are defined in relation to one another. In civilian contexts this means that the expected masculine behaviour of a rural white farmer in Australia is likely to entail a range of fundamentally different expectations to those placed on an urban lawyer. While there is likely to be a significant overlap in regard to expectations placed on both—commonly around avoiding femininity, explicit heterosexuality, limiting emotional displays and risk taking and a willingness to violently defend reputation—these aspects manifest differently depending on the group or context. For example, aspects of urban professional masculinity may be read as feminine in another context. This is reflected in discussion around the effeminacy of ‘latte liberals’ and ‘soy boys.’

In relation to war, different understandings of masculinity are also essential. For instance, research with United States military professionals has suggested that military men define their masculinity in opposition to civilian men’s perceived lack of bravery, physical strength and sense of duty (in addition to their claimed difference to women). Similarly, within the military, different branches deploy tropes to mobilise different behaviours. This means that the Navy may frame the infantry as ‘meat heads’ while the infantry may demonise logistics as a bunch of ‘pencil pushers’. Each of these articulations deploy different narratives of masculinity to promote different behaviours. However, all of these understandings are essential to the practice of war. Examples such as these show that there are multiple masculinities defined in relation to one another, rather than just a single version which can be taken too far and become toxic.

Work that has been done on the multiplicity of masculinities implicated in militarism has shown that it is counterproductive to only focus on the most excessive forms. Instead, to understand how harmful masculinities become salient, it is essential to explore the interplay between masculinities in a given space. While militarised forms of masculinity tend to have harmful impacts, the kind of harms varies based on the construction of masculinity and the context in which it is performed.

Which kind of wars?

Just as there is a wide array of masculinities, there exist a significant diversity of forms which war takes. Different understanding of acceptable targets, tactics and funding sources rely on notions of masculinity which permit or condone those factors as desirable for men to perform. When we talk about ‘male warrior culture’ it is easy to conjure an image of idealised warrior—muscular, clad in camouflage and ready to do battle. However, one thing that I have learned from studying the transformation of war, shifts in masculinities after war and the shifts in jihadi groups over a 30 year period is that masculinity matters in different ways within different wars.

Wars are social spaces with different rules, dynamics and characteristics. Within war the men engage in fundamentally different patterns of violence than they do in peacetime. For example, my work on South Sudan has suggested that the instability of conflict and the influx of small arms has fundamentally shifted how men respond to community conflict. Prior to the Second Civil War in Sudan (1983–2005) masculinity demanded that men engage in reciprocal raiding if a community conflict arose. The experience of war, however, shifted the nature of this raiding from relatively non-lethal strikes focused on symbolic conflict, to brutal attacks against civilian populations using small arms. This change was partially material—in that it required access to small arms—but it also relied on shifting obligations placed on men. Prior to the conflict, committing lethal raids against civilians would have been seen as a cowardly act for men to commit, while during the conflict it became an obligation.

Due to the complex dynamics that exist in any given site of conflict, the forms of violence and abuse will similarly vary. It is reasonable to expect that in different types of war different forms of masculinity will be most salient, and that when placed in new contexts, forms of masculinity that had not previously been hugely violent may become so. For example, when peacekeepers from the Global North are deployed to missions in the Global South, this may result in forms of abuse and exploitation which they do not practice at home. To address the harms which masculinities produce on war and other conflicts of crisis requires active attention to the localised interplay between multiple masculinities and the particularities of war in that space.

Responding to the difficult subject: Empathy and complexity

Conversations around masculinity and violence are difficult. They require men to look inward to how everyday forms of masculinity fuel, support or challenge violent masculinities.

To have these conversations it is important to remain empathetic—not just to the victims of men’s violence, but also to those who enact the violence itself. Kathleen Barry has argued that to unmake war we need to explore how men might remake themselves, creating new ways to be men in the world that promote peace. This kind of empathy requires a degree of necessary complexity. In using generalised accounts about masculinity and men’s violence, we risk losing the granular difference between forms of masculinity and the forms of violence they produce. A more complex account can move beyond the claim that masculinity matters in war, to which masculinities matter, how and in what contexts.

Due to this, conversation about masculinities and war are essential for those interested in developing more effective responses to war. But, the conversation requires an empathetic eye to the variety of ways in which men engage in violence to prove their manhood. 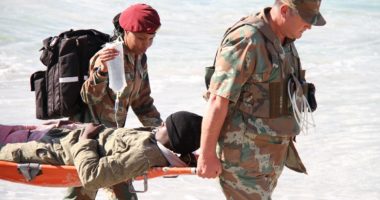 While a woman’s experience in a prisoners of war (POW) camp may not differ drastically ...