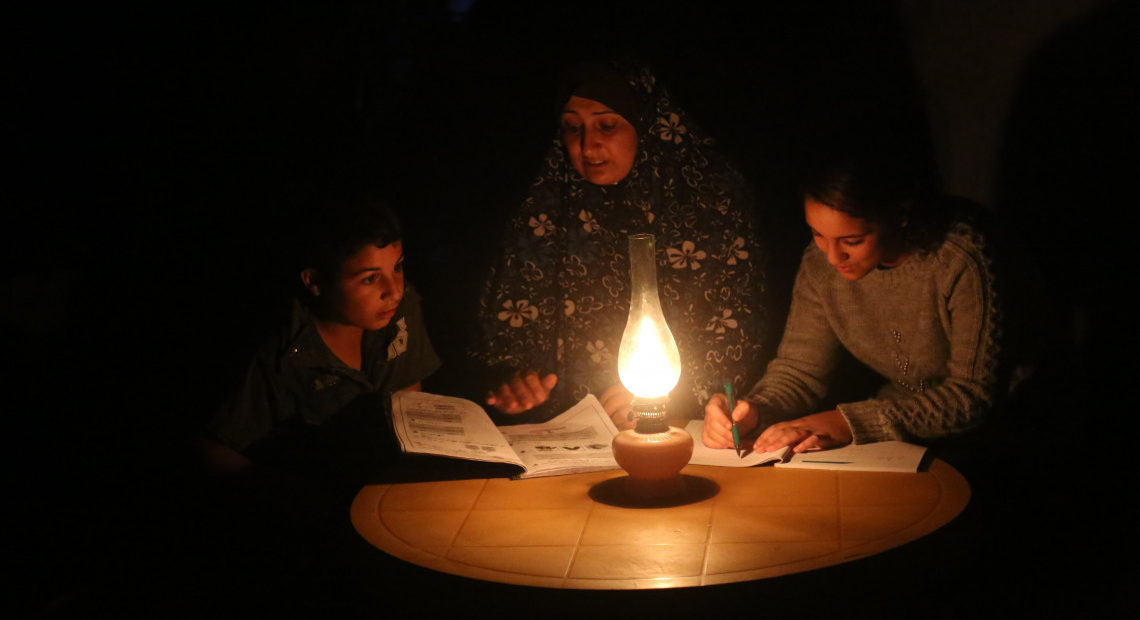 Gaza Strip, children doing their homework by oil lamp during a power outage. The electricity and energy crisis in Gaza has been an ongoing characteristic for the past several years. Sometimes people receive as little as four hours of power a day.

Gaza (ICRC) – A new study by the International Committee of the Red Cross in Gaza shows that 80% of Gaza’s population live much of their lives in the dark, with only 10-12 hours of electricity per day. An issue that becomes extra problematic during heat peak season and poses a threat to health and daily life for Gazans. With the majority of the population being unable to refrigerate food, and inability to operate wastewater treatment plants.

According to the study, the chronic, prolonged electricity shortages and power cuts are taking a psychological toll on people, with 94% of Gazans surveyed reporting that their mental health is affected by the situation. the recent intense escalation of hostilities in May damaged infrastructure and caused massive shortages of supply through the major power lines, leaving people with only 4-5 hours of electricity per day.

While some can afford additional electricity supply through generators at least 500,000 people cannot afford additional power, so they are forced to spend most of their day without electricity.
“We have a small battery to feed the LED lights and we recharge it only when we have electricity. It survives for an hour or two only, then we stay in pitch black. These LEDs go out most of the time,” says Ahmed Darwish, a 64-year-old father from Bureij refugee camp. 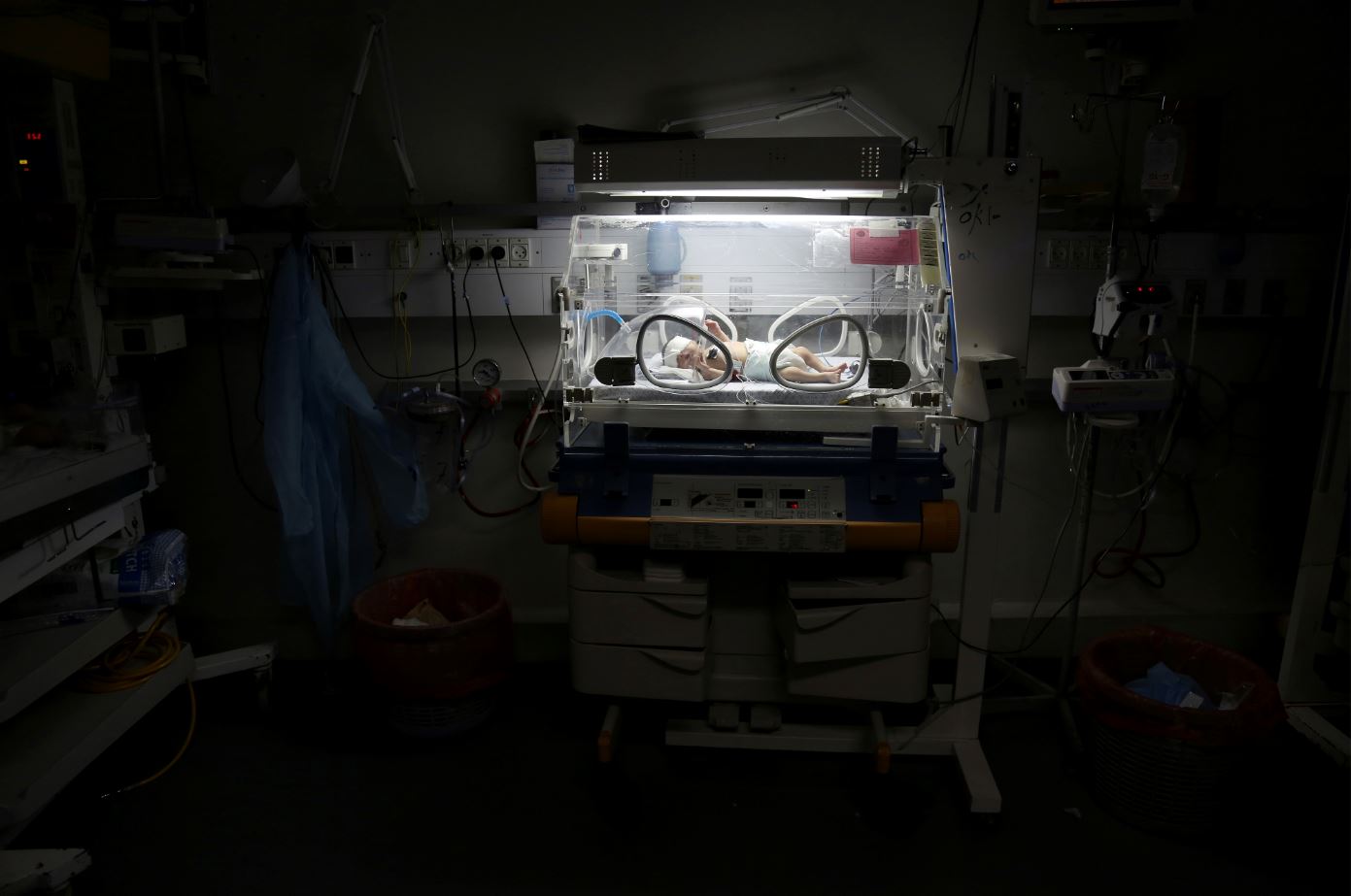 Gaza Strip, Khan Yunis, Nasser hospital. A newborn in an incubator the moment electricity went off in the hospital.

• 94% of those surveyed said the prolonged situation had affected their mental health.

• 82% of respondents told the ICRC that they were unable to refrigerate food because of the situation.

• 27% of those surveyed told the ICRC they could not access any alternative form of power when the municipal power went off. Of these, 91% simply could not afford to pay for more power.

• 57% said that they could access alternative forms of power, but it was not enough to meet their needs in life or work.

In the ICRC survey, Gazans describe a situation where the unavailability of electricity has made daily life extremely difficult for years. It is almost impossible to do housework, devices frequently malfunction when power is out, there is no running water, schoolwork cannot be finished, people have to shoulder a massive financial burden to buy extra power (in the form of generators) and the power cuts even contributed to environmental pollution that impacts people’s health.

“It feels just like a cemetery when the power is out. Pitch black. I light up the oil lamp. Even the LED lights, they are insufficient because the batteries are not fully charged. I also don’t always have oil for the lamp, and it is also insufficient for my kids to study on,” says Mariam Hunaideq, a mother of six who lives in Nahr Al-Barid in the southern Gaza Strip.

The findings of the survey confirm long-standing testimony by people in Gaza and ICRC’s own observations. With electricity supply reduced to three to four hours a day during peak crisis times, people in Gaza experience heavy limitations to going about their daily business. Even when Gaza enjoys a period of calm and electricity supply reaches 10-12 hours a day, extreme heat and import restrictions of fuel to run the Gaza power plant pose a threat to health and daily life for Gazans.

The lack of electricity also means that wastewater treatment plants can no longer be operated, and wastewater is pumped into the sea untreated polluting large parts of Gaza’s shoreline. Not only does this pollute the sea, it contributes to the faster spreading of antibiotic-resistant bacteria, which endanger the health of people in Gaza and beyond.

“Electricity has become an issue in Gaza that profoundly impacts basic services like water supply, wastewater treatment, health facilities, as well as also businesses and irrigation of crops and fruit. Particularly in urban contexts like Gaza, people’s well-being and public health conditions strongly depend on electricity, even after the fighting has ended. In 2021, Gazans should not be living like this. We are calling on the authorities concerned and the international community to recognize the situation and work towards improving it”, says Mirjam Müller, the head of ICRC’s Sub delegation in Gaza.

Electricity is not the only unreliable service in Gaza. There are also issues with the water supply and water treatment, health services and irrigation for local food production. All these systems are interconnected. When one fails, the others can too.

The ICRC launched its Gaza Resilience Programme in 2020, which aims to understand these systems and how they are interconnected and find ways to increase their resilience to system shocks, including improving water and wastewater systems and power supplies in a resilient way.

One example is to automize operations of critical infrastructure components such as electricity transformers and pumping stations so that no one must risk their life to operate them manually in times of conflict. The Resilience Programme also provides a more efficient and resilient management of Gaza’s interlinked water and electricity systems.

1. The ICRC survey about Gazans’ needs and their response to electricity shortages was conducted from September to November 2020. In total, 357 people of both sexes (62 % male, 38 % female) over the age of 18 years, were interviewed in five governorates in the Gaza Strip. The survey and report can be found here.

2. Established in 1863, the ICRC operates worldwide helping people affected by conflict and armed violence and promoting the laws that protect victims of war. A neutral, independent and impartial organization, its mandate stems essentially from the Geneva Conventions of 1949. it is based in Geneva, Switzerland, and works in more than 100 countries.

3. The ICRC has been present in Israel and the occupied territories since 1967. We promote compliance with international humanitarian law and work to mitigate the impact of violence, conflict and occupation on civilians through protection activities and assistance programmes. The ICRC visits detainees in Israeli and Palestinian places of detention and works to maintain family links through the Family Visit Programme. We also support livelihood projects and help improve access to essential services like water and electricity in Gaza.

4. During the escalation ICRC teams helped to restore access to water, sanitation and electricity for almost 1,000,000 people in Gaza. ICRC supported the direct repairs of water and wastewater networks at 17 locations and donated 240,000 litres of fuel to ensure some of the most vital water and wastewater infrastructure has electricity. Through use of ICRC’s contingency stock and together with service providers in Gaza, ICRC supported the repairs of around 600 damaged infrastructure sites including water wells, electricity grids, water/wastewater pump stations and networks.

5. The ICRC has offices in Tel Aviv, the West Bank and Gaza and supports the work of the Palestine Red Crescent Society and Magen David Adom in Israel.