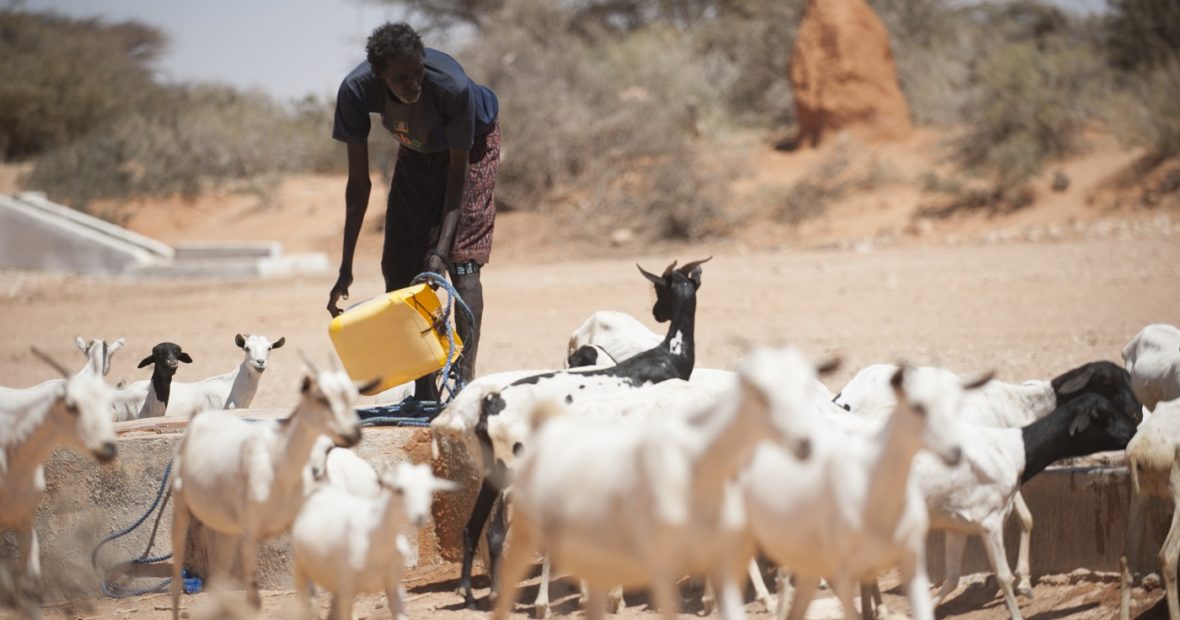 The global climate crisis can be felt most severely in many of the countries and regions where the ICRC works. Of the 25 countries considered the most vulnerable and least prepared to adapt to climate change, some 60% are enduring conflict. For affected communities living in these contexts, climate change, environmental degradation and loss of biodiversity are additional stresses that threaten their survival. As part of the ICRC’s multiple efforts to respond, the Innovation Facilitation Team launched a Challenge series on the topic of climate and conflict to seek out and support new solutions.

Launched in 2021, the first Climate & Conflict Challenge focused on Africa, specifically the Sahel and the Horn of Africa. It resulted in a total of six proposals to strengthen climate adaptation among conflict-affected communities, each receiving seed funding and technical support.

The Challenge gave country teams an opportunity to look at cross-cutting problems through an innovation lens. “Innovation at the ICRC provides a safe space for colleagues to explore new ways of thinking and testing their ideas,” says Mima Stojanovic, Innovation Facilitation Team Portfolio Manager. “With this Challenge, we are leveraging the topic of climate change to really motivate cross-team engagement.”

From Emergency to Adaptation

For Africa Regional Director Patrick Youssef, the Sahel and the Horn of Africa were natural places to launch the first Challenge: both regions suffer from chronic conflict, extreme political instability and mass displacement; their populations include farmers and herders relying on rainfall for their livelihoods; and unpredictable weather patterns mean destructive droughts and floods are increasingly common.

It is this accumulation of threats that make it essential for the ICRC to incorporate climate adaptation into its core humanitarian operations. “Climate change brings more tensions in ungoverned areas, and competition for natural resources creates more violence,” says Youssef.

“In the field, we need to move from emergency to adaptation as quickly as possible, so we wanted to ignite an interest from the ground up that can be harnessed at the ICRC’s regional level and then by the team in Geneva,” Youssef explains. This ambition is supported by the work of the Red Cross and Red Crescent Climate Centre, which has been helping country teams to analyze climate risks and use that analysis to inform their programs.

Issuing a time-constrained and geographically specific call for ideas, with funding and support as incentives, helped to focus team objectives on interdisciplinary problems and increase momentum towards the goal of climate adaptation programming.

The six delegations supported with their ideas include Burkina Faso, Central African Republic, Mali, Mauritania, Niger, and Sudan. The proposals are diverse yet share elements of the core characteristics of innovation at the ICRC – testing, user engagement, and anticipation of the future. The main focus is on harnessing nature-based solutions, supporting good resource management, improving access to safe, reliable and sustainable energy and fuel, and above all, working with communities.

In Niger, where conflict is forcing host and displaced communities together in areas with scarce resources, the delegation is designing an irrigation, agroforestry and agropastoralism program aimed at strengthening livelihoods and reversing environmental degradation. The program is based on the notion that in order to be resilient, a community needs to live in a resilient environment.

Describing the proposal as “an integrated program of eco-resilience,” Water and Habitat Coordinator Lucien Blandenier says that “operating in areas of conflict brings complex and interconnected challenges, but this is precisely the kind of work humanitarian agencies must now undertake.”

“We have to focus on both adaptation and prevention, otherwise we will not address the long-term needs,” says Blandenier.

For Regional Economic Security Coordinator Salvatore Falfaglia the proposal is not just about new technology, but about a new way of thinking. “We want to inject a new mindset of not wasting the waste,” he says, “so that whatever households produce, particularly animal byproducts and waste, can be recollected and reused to generate power.”

Falfaglia’s colleague Candice Salkaln, Operations Advisor, says the project fits within a broader understanding of what the ICRC does in the face of climate risks and environmental degradation. “Humanitarian work is not limited to emergencies,” she says.

In the north of Mali, where conflict and drought are perennial, the proposed solution is not about hardware, but information. The goal is to get reliable climate and weather information into the hands of people who need it: the 80% of the population who depend on rain-fed farming and grazing.

“The climate information is there, but it is not reaching the farmers at the right time,” says John Karongo, Deputy Economic Security Coordinator in Bamako.

The ICRC’s strong network in remote parts of the country means that, in partnership with the national meteorological department Mali Meteo, the team will not only be able to bring this information to the farmers and herders but also train them on how to understand and apply it to their livelihood activities.

“Of course, in Mali, the main issue is the conflict, causing an invaluable loss of lives and disrupting the already poor services in remote and rural areas,” says Economic Security Coordinator Giulio Doronzo. “However, climate change is layered on top.”

People at the Center

Technical experts from different ICRC departments worked with the participating field teams through the submission process, placing emphasis on well-structured ideas and testing plans that respond to specific and appropriate community needs in each context. “There’s the innovative idea itself, and then there’s how you make it work in the broader ecosystem,” says Stojanovic.

The aim is not only to prepare for climate changes that are already underway, but those that may become more extreme in the future. As the climate and environmental crisis deepens, the situation for conflict-affected populations is worsening in ways that are being felt day to day, and season to season.

Acknowledging that climate change is a crisis accelerant, and finding way to mitigate its impact, is essential humanitarian work for the ICRC, says Youssef. “As always, we are trying to put affected populations at the center of what we do.”

Going forward, the Climate & Conflict Challenge will be rolled out to additional regions and delegations across the ICRC.