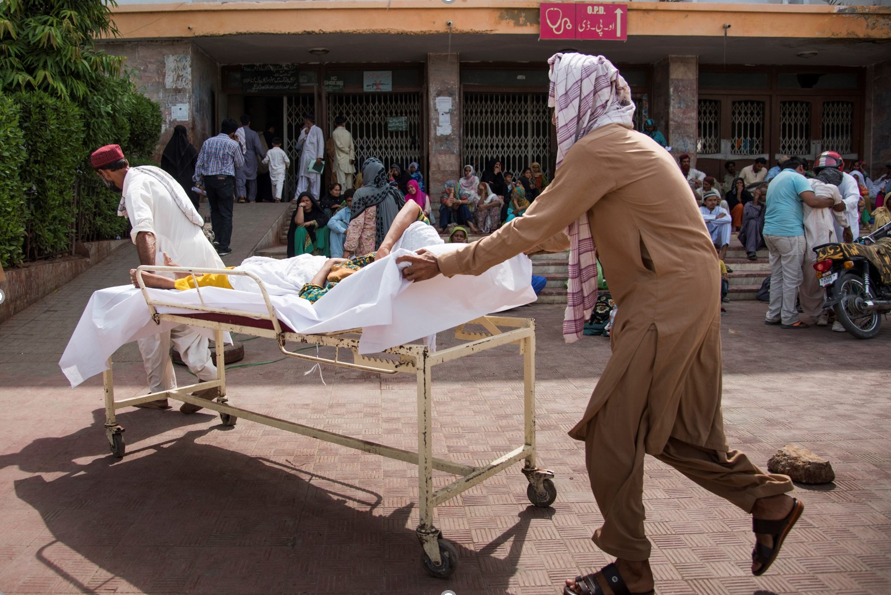 New research carried out at hospitals in Pakistan shows how applying tools from behavioral science can help the ICRC better understand and influence people’s actions. It is a technique that could be applied to a diverse range of settings—from healthcare facilities to battlefields— as well as help the ICRC to more effectively fulfill its mandate.

“I became interested in behavioral science in 2017,” says Fiona Terry, Head of the ICRC’s Center for Operational Research and Experience (CORE). She was intrigued by the concept of “nudging” and social norms, the idea that people can be influenced to make better decisions without removing their choice. A simple example is encouraging people to eat better by giving fresh, healthy food greater prominence in a grocery store.

The more she dug into the subject, the clearer it became that behavioral science had a blind spot when it came to the kind of tricky, real-world situations in which ICRC delegates operate. Nudging was applied to things such as paying taxes on time, adhering to speed limits, school canteen waste, or texting while driving. “We wanted to test it outside a Western European mindset, in the sort of situation where we would find ourselves,” says Terry.

At the time, Terry was working on the ICRC’s ‘Roots of Restraint in War’ project, investigating how to effectively influence armed forces and armed groups to abide by international humanitarian law. She realized that “a lot of the ICRC’s work is trying to influence behavior,” so she came up with a research project that would test the utility of behavioral science insights in a field situation.

In Pakistan, Terry joined colleagues who had previously conducted a baseline survey on violence against healthcare workers. Findings showed that the primary source of frustration and anger among patients’ caregivers and relatives was the slow arrival of ambulances; thereafter, the hospital responded with a public awareness campaign that encouraged drivers on the city’s crowded streets to give way to emergency vehicles. “From that, I realized there were very good relationships to build upon in Pakistan: there was a fantastic team already innovating,” says Terry.

With funding from ICRC Innovation, the team partnered with Policy Analytics, a Swiss-based consultancy firm to conduct the research. Entry visa challenges and COVID-19 threw up unexpected hurdles that meant the project had to be remotely managed from Switzerland, making maximum use of the openness and professionalism of staff on the ground in two hospitals in Pakistan, the Indus Hospital and Health Network in Karachi and the Hayatabad Medical Complex in Peshawar.

The first, crucial step was “process mapping” of the emergency rooms. Interviews with hospital staff from managers to security guards, enabled the creation of a flowchart of the steps patients and their caregivers take from the moment they enter the hospital, and the identification of points of tension along the way where stress and anger can result in violence.

With that framework in hand, three low-cost nudges were chosen with the hospital staff: the first, known in the jargon as a “personal commitment device”, was a signed agreement, offered at registration, stating that staff and patients and their caregivers will treat each other with respect; the second, called a “public commitment device”, is a pledge posted on the wall to which hospital visitors can add their name or thumbprint; and the third was an information desk where visitors could seek information on waiting times, for example. The aim of all three was to defuse stress while humanizing the emergency room experience.

A randomized control trial – as Terry puts it, “the gold standard for testing the effectiveness of an intervention” – stripped out potential bias ensuring that each nudge was measured independently, on its own merits.

The clear outcome was that the personal commitment device – the signed promise made between a caregiver and a staff member – was the most effective in changing attitudes and behavior. Caregivers reported a 10 percent increase in their feelings of reassurance which reduced their likelihood of becoming violent.

The Power of Behavioral Science

Although the result itself is interesting, for Terry the bigger successes are in proving that randomized control trials can be applied to measure effectiveness in a humanitarian setting and that concepts from behavioral science, such as nudges, can be applied in the contexts in which the ICRC works.

The findings from this study on the use of behavioral science to reduce violence in emergency rooms in Pakistan builds on other ICRC research on restraint in warfare, influencing non-state armed groups, and staff attitudes towards energy consumption and the environment.

“This was innovative, and we learned a huge amount,” says Terry, who is continuing her exploration of the benefits and utility of behavioral science in supporting the ICRC’s work.