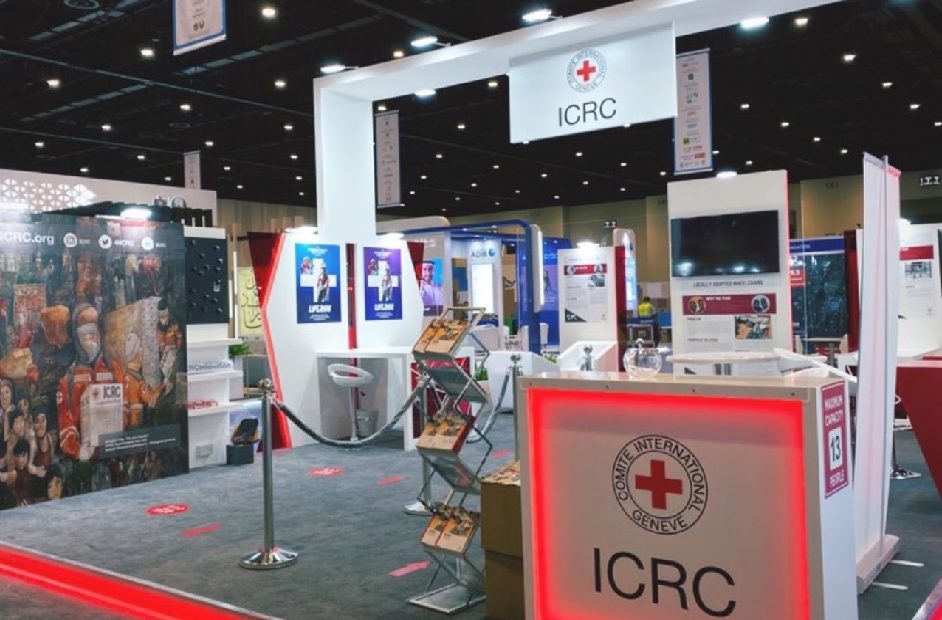 The ICRC’s mission in the United Arab Emirates (UAE) is about diplomacy, so last month’s launch of Expo 2020 Dubai was seized as an opportunity to build networks that could further influence the protection of civilians affected by conflict and highlight the risks of digitalization as part of the larger discussion on the future of innovation.

Delayed by the coronavirus pandemic, Expo 2020 Dubai finally opened in October 2021. The six-month-long festival of ideas about the future is a celebration of optimism and achievement. It is an opportunity for the 192 participating nations to showcase the best of what they have to offer while displaying their wares in statement architecture pavilions spread across a sophisticated, purpose-built 438-hectare site.

For UAE Head of Mission, Clare Dalton, the Expo is a chance to further ICRC interests on a very different stage. “We can continue to go to the same sorts of humanitarian events we’ve been going to for years, and we’ll just meet exactly the same people, but we may achieve even more by doing the non-usual,” she says.

Participating in a big, state-backed event strengthens relations with the national government, building upon useful alliances and sparking new conversations that might not otherwise happen. This is especially pertinent as the UAE extends its influence globally, including in countries where ICRC conducts its core work of humanitarian response.

It is also an opportunity for the ICRC to shape and influence some of the conversations about the future that the Expo is all about. “We’re jumping in on things that are connected with ICRC interests globally,” says Dalton.

ICRC’s participation in Expo Dubai includes events on how international humanitarian law (IHL) intersects with business or cultural property and on the role of innovation in humanitarian response, joining panels on anticipatory humanitarian action, and debates on clean air, sustainability, and climate change.

The ICRC’s Expo Dubai Project Manager, Felipe Donoso, emphasizes the importance of ensuring that, while official visitors to Expo from around the world shape their “optimistic, futuristic, vision of things… a project of building humanity together,” the experience of those the ICRC works most closely with—civilians caught up in conflict and crisis—are not airbrushed out.

“They must be on the agenda, in a beneficial way, and we are bringing these issues, this sense of humanity, the principles of humanitarianism to the fore,” Donoso says, calling the Expo “a fantastic platform for interaction and communication.”

But how to capture attention amid the cacophony of hundreds of pavilions and millions of visitors? “We made it as interactive as possible,” says Nan Buzard, Head of Innovation.

At the ICRC’s Expo Booth, Virtual Reality Tools Project Support Officer, Issam Naime, deployed a VR headset with an urban conflict scenario to impressive effect. “The simulation is so immersive that it can change the perception of what the ICRC is doing in the field, and of what the civilian population is living through,” he says.

In one of the immersive scenarios, users must escape an armed onslaught in a city, rescuing a wounded child along the way. Naime recalls one Expo visitor, an avid gamer who was used to wielding weapons in computer games, not running from them: “He asked me if he could shoot the civilians in the simulation, and I said, ‘No, this is the opposite, you are the civilian’.”

Afterwards, the user said he had never considered the plight of civilians in war zones—real or virtual—which triggered a subsequent conversation about the laws of warfare. For Naime, these anecdotes are regular events.

The next step is building additional ways to capitalize on the flicker of interest and empathy that VR sparks. “We know it’s a powerful tool, and we already use it in conveying IHL to militaries. But what more can we do with it?” asks Buzard. “What’s the way to scale to a larger communication and influence?” These are questions to which the ICRC continues to seek answers by trialing operational and programmatic use cases for immersive environments with global partners and the network of national societies.

Getting the most out of the Expo requires being strategic and targeted, says Dalton, but it does not require a huge investment of resources. The ICRC is running some of its own events—hosted by the French and Swiss pavilions—with both the Director-General and President attending in-person events. However, engagement in Expo is careful as the ICRC determines what is effective and what is not.

“Not everything will work out but that’s okay because we’ll learn something about how to engage, how to communicate and how to make these things more accessible to different kinds of people,” Dalton says. When the next Expo comes around again, in Osaka, Japan in 2025, the lessons learned will be incorporated from this first experience.

“As an organization, we are open-minded about partnerships, about collaborating differently and better, so these sorts of opportunities are what we have to explore if we want to develop that further,” Dalton says. After all, if the world is discussing the future of humanity, they should include the future of humanitarian response.