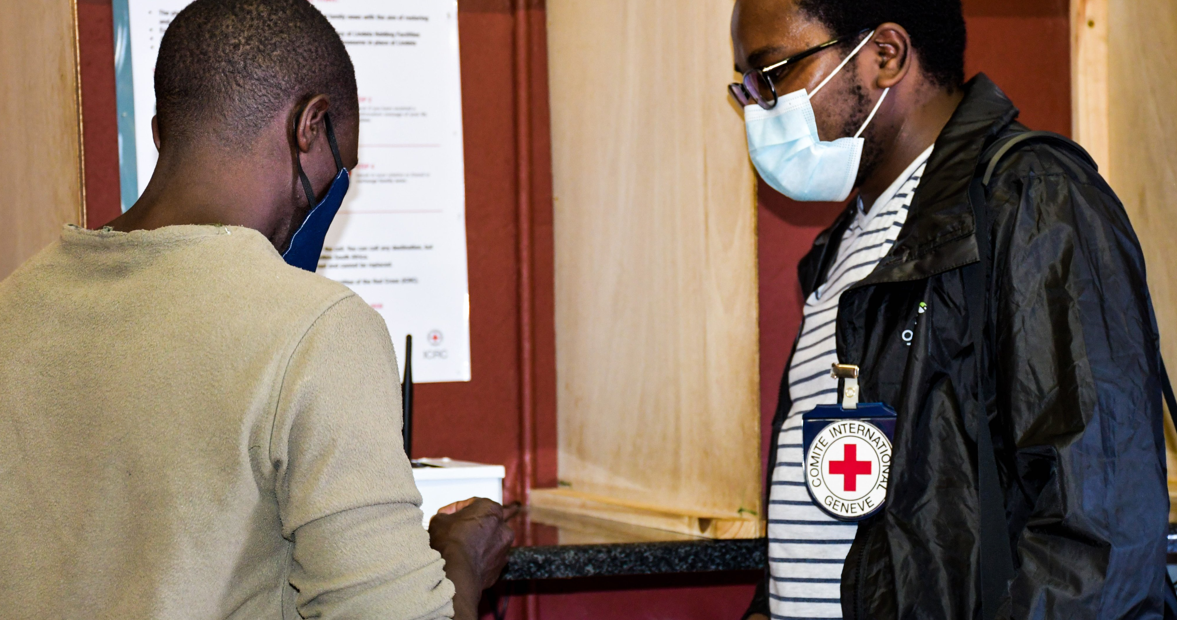 To provide effective assistance and protection for affected people, ICRC delegations must adapt to local and global changes affecting both the countries in which they work, and the organization. That means being attuned to shifting needs and being willing to change practices to find solutions that better address those needs and circumstances.

“My philosophy is that necessity should be the mother of innovation,” says Mamadou Sow (@MamadouSowICRC), the ICRC Head of Regional Delegation in South Africa, responsible for a vast and diverse region that includes nine separate countries.

The very nature and circumstance of the delegation – with little in the way of outright conflict but a great deal of migration – has driven the development of initiatives that respond to the realities on the ground. This includes a forensics chatbot for improving communication and information sharing related to COVID, and a phone system that allows migrants to more easily get in contact with their relatives.

Innovation does not just happen, it must be fostered, explains Sow. “I work to make sure we have a very diverse team—not just culturally or ethnically—but in the way they think, and to create an environment that is safe for people to speak, to challenge the dominant paradigms.”

That does not mean every idea gets the nod, but every idea does get heard. “Colleagues have to identify how something is going to improve the quality of life of the people we serve, and they have to identify the trade-offs, because there are always trade-offs with innovation. So, we go through this process and make a collective decision,” says Sow.

These efforts bore fruit in South Africa when the pandemic took hold, forcing an abrupt change in the way things were done. “It was good for us to have to think differently and see how we can continue to sustain our humanitarian work, while adjusting to the new realities.”

Additionally, in South Africa, a process of “deceleration” was instituted by the ICRC, meaning a concerted effort to handover ICRC responsibilities where possible to local stakeholders and National Societies due to reduced funding and more pressing prioritizations elsewhere in the world.

Rather than being dismayed or demotivated, Sow’s team “saw challenges as opportunities.” After all, funding is always finite, resources are always scarce, and here was a chance to “empower authorities and beneficiaries in a different way,” because, as Sow puts it, in humanitarian work “it’s not about us, it’s about them.”

A way to overcome these dual challenges—COVID, externally, and funding priorities, internally—was found at South Africa’s Lindela Holding Facility outside Johannesburg. Undocumented migrants awaiting repatriation could only make phone calls to relatives and loved ones four times a year when a team from the ICRC first arrived.

Queues, hundreds long, would quickly form in front of ICRC workstations and, as each detainee was only permitted three minutes to make a phone call, there was rarely enough time for everyone.

“We came to the realization that the way we were offering services was not responding to the needs of all the migrants detained in Lindela,” says Protection Coordinator Marie-Astrid Blondiaux. “It was a very time-consuming process for detainees, queuing for a long time.”

It was often frustrating too. With the ICRC team only visiting for a couple of days every few months, there was a very small window for making calls. Detainees who reached the front of the queue frequently made calls that went unanswered because of the time difference to their home country, a poor network, or their family member was simply unavailable.

The problem was that this essential service—one that contributes to the well-being of migrants and can sometimes help them make the necessary financial arrangements to speed up the deportation process—was insufficiently available. The simple solution, Blondiaux explains, was to establish four open-access kiosks, each supplied with a desktop GSM phone, and to provide migrants with 5 Rand (CHF 0.30) call vouchers, offering them the freedom and autonomy to make calls daily between 8am-3pm.

The plan was implemented in February 2021, in partnership with South Africa’s Department of Home Affairs which runs Lindela, providing over 4,000 calling vouchers to detainees until mid-June. Simple, multi-lingual posters were designed to explain the service and the vouchers were included in the admissions package provided to new arrivals at the facility, alongside other essentials, such as a toothbrush or blanket.

The approach also required far less input from ICRC staff, making it a COVID-safe, cost-effective, and sustainable solution. At an estimated annual cost of less than CHF 10,000, it is highly likely that this solution will be taken on by another agency when the ICRC ’s Pretoria Regional Delegation winds down its activities in Lindela by the end of 2022 as part of the deceleration process.

“It’s a very low-tech solution, but it’s exactly what was needed,” Blondiaux says. Queues and frustration were replaced with access and autonomy.

Efficiency and adaptability was the objective behind another initiative pioneered by the South Africa delegation. At the start of the coronavirus pandemic last year, when the forensics team found itself overwhelmed with repeat requests for information, Forensics Specialist Neil Morris came up with the idea of a chatbot that could “replicate a human interaction, but not replace it.”

The South Africa delegation was fielding large numbers of email queries from medical and mortuary professionals across Africa about the correct way to manage the dead during COVID. For the ICRC’s forensics team, it was time-consuming, while for those seeking answers, the response time was often too slow.

“Automating the initial interaction was a very good way to reduce the workload and speed up the response, improving overall communication,” explains Lucinda Evert, a forensics specialist in Pretoria.

The chatbot, named ‘Steve’, could answer simple questions and provide links to information and guidelines drawn up and stored by the ICRC. If the chatbot was unable to provide the answers, then a forensics specialist was still available, as before, via email or phone. The initiative sought to augment, not supplant, person-to-person interaction.

The ICRC’s Geneva-based Technology Adviser, Fabrice Lauper, is looking at other potential applications of the chatbot, as well as any data protection issues, and points out that this was an effective initiative precisely because it was a specific response to a specific need. “Choosing the right target population is very important: in this case, professionals dealing with corpses linked to COVID, so hospitals, morgues, cemeteries, even churches, but not the general public or vulnerable populations.”

Finding innovative solutions to challenges, new and old, is essential because it makes the ICRC more nimble, more responsive, more efficient, and, ultimately, more effective. As an organization whose fundamental concern is serving people affected by conflict and crisis, innovation starts in the field and on the ground, where real world needs can be identified by ICRC delegates in their daily interactions with people.

But as the South Africa delegation shows, when the pandemic limits those interactions and resources are stretched, innovation is not only still possible, but essential.

“The humanitarian world is transforming, evolving,” says Sow. “And as an organization we are changing, both our internal systems to be more future-fit, but also the way we support people affected by armed conflict in this changing environment.”