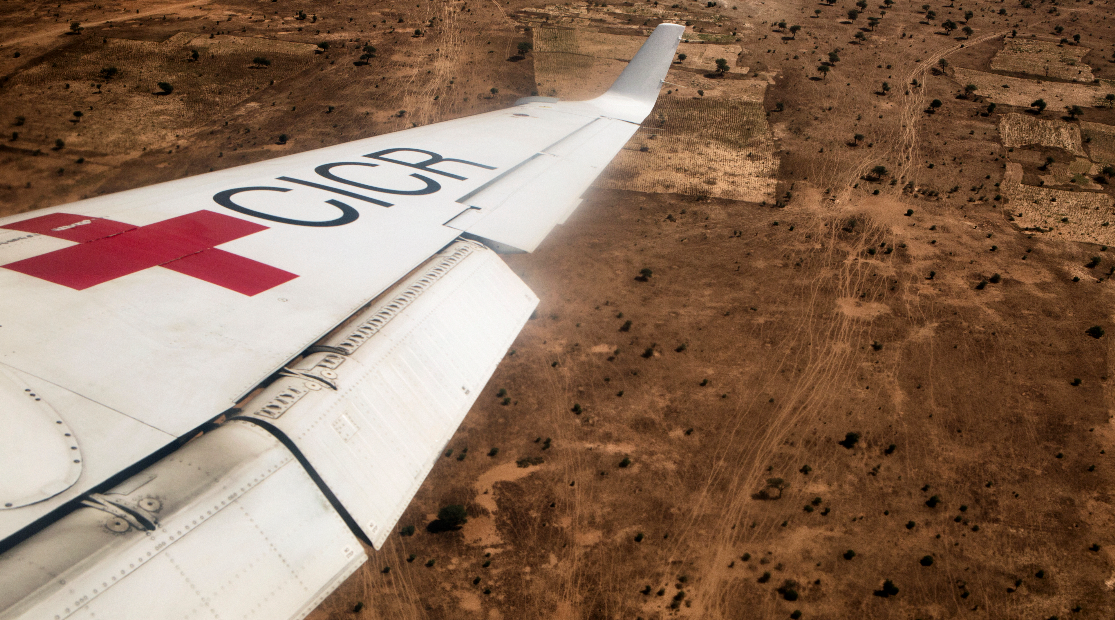 Unmanned aerial vehicles, or drones, are a valued component of the ICRC’s air operations, used to increase efficiency and access populations around the world. Despite ongoing challenges, a drone’s reliability to deliver positive impact in humanitarian operations continues to be explored and measured.

Air Operations (AirOps) has been central to the ICRC’s humanitarian activities since the 1930s, when Marcel Junod first used aircraft to evacuate wounded Ethiopian soldiers during the conflict with Italian forces.

Following World War II, the AirOps expansion began in earnest with the purchase of a few airplanes. But when a rash of post-independence conflicts erupted in parts of Africa in the 1970s, the ICRC shifted to leasing and chartering aircraft, allowing the creation of a larger fleet with greater flexibility.

With more than 20 aircraft currently in operation, ICRC planes routinely transport the sick, wounded and displaced, deliver food and medical supplies, and carry delegates and equipment to areas not served by commercial flights. In short, the ICRC fleet is an immense logistical and life-saving operation.

However, it was not until the early 2000s that ICRC pilots first began to encounter drones. Working in warzones, unscheduled military drones began to slice through the air space with growing and unnerving frequency.

“Drones came into our thinking through the wrong door,” says Michel Schaffner, ICRC’s Head of AirOps. Simply put, “they were a hazard for us.”

The military use of drones for targeting killings and reconnaissance have given the technology a deservedly bad reputation among war-affected civilians, rights advocates and humanitarians. But in the right hands, they can do good too, for example by delivering medical supplies and blood or monitoring endangered animals.

But just because a technology exists does not mean it should be adopted. That is why, two years ago, the ICRC began exploring the humanitarian situations in which drones could be more than just useful but essential.

Drones are not about to replace airplanes, but there are areas where they can make humanitarian operations more efficient and cost effective.

“We have to focus on the need, to make something meaningful to the ICRC operational context,” says Alexis Clere, the ICRC’s AirOps Compliance Manager.

Whelan explains that just one flight can provide detailed images covering over 250 hectares which can then be run through a computer software program and, within a few hours, produce a Google Earth style 3D image of an area down in high resolution.

“The alternative is to deploy a team of land surveyors using laser rangefinders who can take days to come up with a similar result,” says Whelan. “Using the drones is cheaper, faster and more precise.”

Satellite imagery is often—though not always—available, but it can be expensive to purchase, commonly exists at a far lower resolution of a few meters per pixel, and can be obscured by cloud, a fundamental problem in certain areas, such as the tropical belt or during a cyclone.

To show the power of what is possible, Whelan describes an experiment collecting drone imagery at the ICRC’s Ecogia Training Center in Geneva. Accurate models of buildings, heat sources and terrain provide information on likely population densities, access routes, dangers, and the lay of the land.

Every piece of information can assist the humanitarians on the ground to know what they are getting into, and therefore respond more quickly and more appropriately. It’s the kind of data that can save time, money and even lives.

All of these use outdoor flying drones but Clere says a subsequent testing phase will look at using indoor drones to carry out stock inventories or measure levels of thermal insulation to improve energy efficiency at ICRC premises.

There are limitations, such as short battery lives and flying times, and often a regulatory requirement to only fly within the line of sight, yet the possibilities remain many and varied.

However, the ICRC is proceeding with all due necessary caution. “A drone is not a neutral piece of equipment, especially in conflict zones,” Clere says.

In many places, drone use is controlled and requires layers of bureaucratic approval, licenses and permits, or is viewed with suspicion and even fear.

“It is important to understand what is at stake when flying a drone,” Clere says. “It is not just about collecting data, it involves the ICRC’s reputation, its neutrality, its impartiality. That is very sensitive.”

Transparency, inclusion and communication are essential, adds Whelan: “You have to have the authorities and the communities on board to make sure there is no misunderstanding, because we are conscious that drones mean different things to different people, especially in conflict areas.”

For these reasons the ICRC’s use of drones is not ad hoc but wrapped into AirOps and logistics. “Drone use has to be part of aviation, part of a full ecosystem,” says Clere. “We have established a drone hub to mutualize all the equipment and facilitate the training and skills necessary to operate the drones.”

While Clere, Whelan and their colleagues in AirOps and GIS work hard to explore the possibilities that drones offer, they stress that it will always be about technology in the service of humanitarianism, and not the other way around.

“It’s not us who should decide what the drones can be used for,” says Whelan, “it has to come from our colleagues and communities who identify a need. We innovate, to answer a need.”