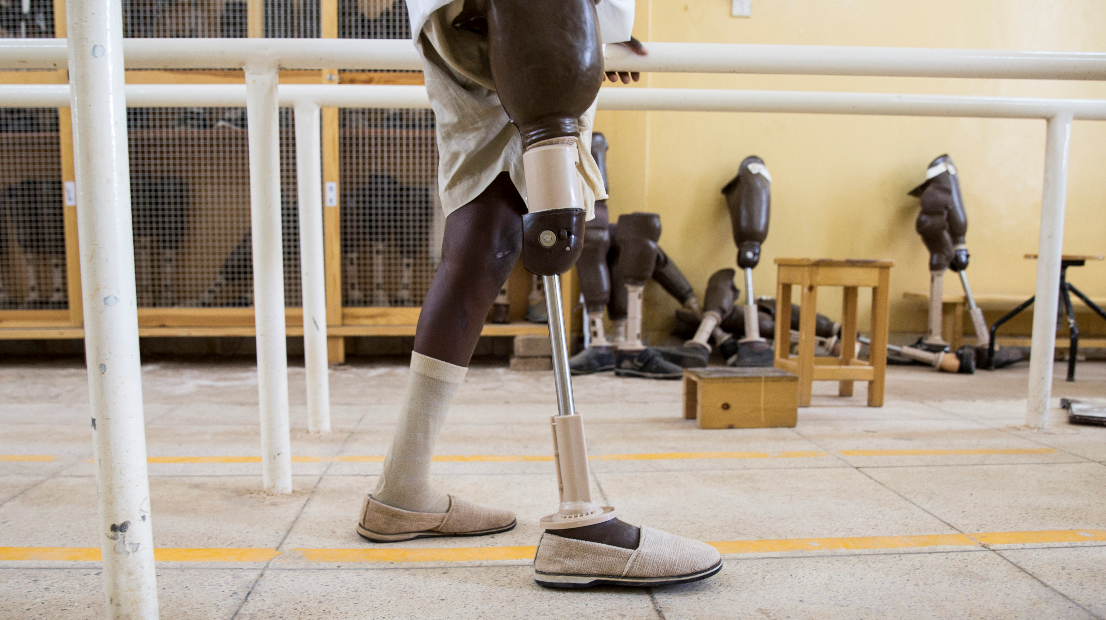 The International Committee of the Red Cross (ICRC) has worked with the National Authority for Prosthetics and Orthotics (NAPO) in Sudan since 1990 to provide prostheses, orthoses and other mobility devices and physical therapy services.

Losing a limb is a violent and painful experience, yet also one that is all too common among civilians caught in conflict. The wounds heal, but the trauma often lasts much longer: physical rehabilitation, learning to use prostheses and rediscovering the confidence to be independent takes immense amounts of compassion, energy and time. To address this, the ICRC’s Physical Rehabilitation Program (PRP) is accelerating the use of virtual reality (VR) and gaming to improve recovery outcomes.

Didier Cooreman, a PRP Prosthetist and Technical Coordinator, had an inkling that VR and gaming might be a good fit for physical rehabilitation, but he needed to find the evidence.

“I wanted to know if VR was a reliable way to improve the process of physical rehabilitation,” says Cooreman. “I needed to test if gaming the process could distract from some of the painful or difficult parts of normal physiotherapy that each patient needs to go through.”

In partnership with researchers at the Beirut Arab University in Lebanon, and with funding from the ICRC’s Innovation Facilitation Team, Cooreman set out to discover if his hunch was right.

The research involved dividing a set of 32 people into two groups aged 18-40 years old, all with traumatic or war-wounded lower limb amputations – the most common injury requiring prosthetics. Many of them were Syrian refugees living in Lebanon’s camps.

One group received three physiotherapy sessions once a week for six weeks, while the other underwent the same physiotherapy with an additional hour of VR activity after each session. Both groups made progress but there was a significant improvement in static and dynamic balance in the VR group.

The research, published earlier this year, found VR to be “a promising, amusing and safe intervention” in physical therapy.

Cooreman stresses that VR and gaming can only be a powerful complement to existing physiotherapy, not a replacement. And by using on-the-market technology, such as games consoles and televisions, Cooreman finds the VR intervention to be both cost-effective and easy to set up.

Following the successful Lebanon pilot project, another ICRC team is testing the hypothesis in Iraq. If the results are confirmed, “it will highlight the fact that VR is truly beneficial for the ICRC’s PRP patients,” Cooreman says.

Encouraged by results so far, he hopes it might soon become a standard, with benefits rolled out across the ICRC’s PRP.

The Benefit: Mind and Body

New solutions and innovative interventions are important because the increasingly urban and protracted nature of modern conflict means that, when it comes to grievous injuries, amputations, prostheses and rehabilitation, “the needs are increasing”, says Cooreman.

This long-term trend is accentuated by the COVID pandemic that is putting immense stress on health systems worldwide, pushing disabled people down the priority list, and by the spread of non-communicable diseases such as diabetes that increase the COVID risk.

The priority in physical rehabilitation is to help patients to become as autonomous and independent as possible as quickly as possible. But it’s not just about getting used to prosthetics and the physicality of new ways of moving.

Even more compelling is the potential for VR to improve more abstract aspects of rehabilitation such as increased self-esteem and mental recovery from the trauma of amputation.

The Priority: the Patient

The use of immersive environments to engage the brain is another extension of that approach towards neuroplasticity.

“The VR research showed improvement, not only physically but also—and this is important—in self-confidence. It’s something we couldn’t be sure of before,” he says.

Gamification of physical rehabilitation can help make the arduous process of rehabilitation not just faster but more fun, allowing patients to continue their physiotherapy even after the session. According to Cooreman’s work, “sometimes they even forget the pain, they carry on longer and they improve more.”

Cooreman likes to imagine a not-too-distant future where, instead of sitting passively awaiting treatment in a hospital, amputees join in a rehabilitation game together.

“They’re in the same room and they start to play together, compete with each other, they create some links, some bonds,” he says. “If it works, and it’s good for the patient, why not do it?”