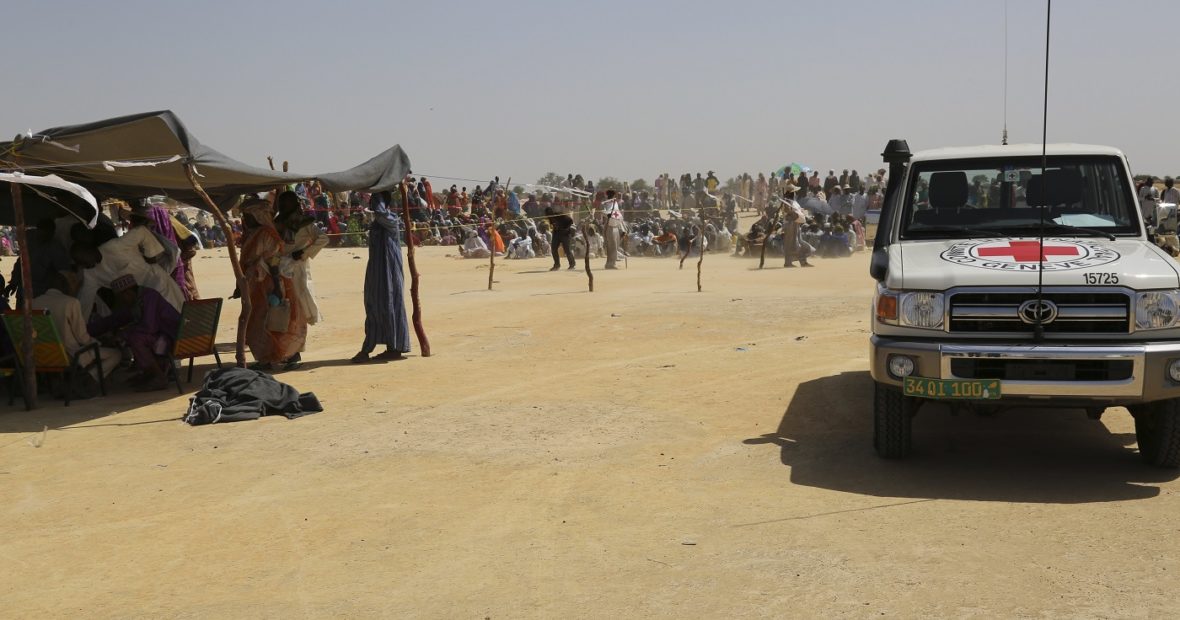 Poverty, climate change and violence are a daily reality in the Sahel region, including in Niger at the heart of what is often referred to as a complex emergency. The delegation, based in the capital Niamey, has shown that openness, adaptability and support can create a space for innovation even when working in some of the world’s most protracted crises.

ICRC head of delegation Nicolas Von Arx was posted to Niger in 2018 following an assignment as strategic advisor to the director of operations in Geneva, and a series of postings abroad, including in the Middle East, Africa, South Asia and South America. Niger was new to him, and he was very aware of how little he knew. But over the years he has worked to create a culture of innovation. The first step, he says, is having an open mind.

“It’s always difficult to know what one wants to achieve at the beginning of a mission,” Von Arx explains. “I need to speak to people, I need to listen to people.” He acknowledges that, “you need time to understand the complexities of your context.”

“When I arrived, I didn’t have my masterplan of what was going to happen,” he says. Von Arx knew he wanted to bring some of his experiences at headquarters to bear in Niger, so he took time to talk widely, listen carefully and question deeply. “I wanted to bring in some of the institutional issues that are debated in Geneva – that are at the forefront of the ICRC’s thinking – and see whether we could integrate them.”

The importance of cross-pollination between headquarters and the field is something that deputy head of delegation, Nicolas Olivier, who also arrived in Niger from Geneva in 2018, after 10 years in the field, stresses. “This rotation aspect is very important,” he says. “It enables you to be updated about the realities of the field and the strategic priorities of the ICRC, and to find a balance between the two.”

One of Von Arx’s early efforts was to tackle sexual violence, which is an institutional priority. Surely this was a topic that everybody could get behind? Instead, he hit a wall: it was simply not a subject people felt comfortable discussing in Niger. “We had to find other ways to approach it, to get people on board, to get it done,” he says.

“We changed the lens through which they saw the issue and, as a team, found a way that was smarter to tackle it,” says Olivier.

Instead of “sexual violence” Von Arx encouraged discussions about “vulnerabilities based on gender”, a much broader set of issues that includes sexual violence. And he connected it to the ICRC’s humanitarian principle of impartiality – “the most central principle we have” he says – pointing out that if you don’t know the needs of half the population then you certainly can’t address them.

Being rooted in the specific local context is crucial, whether in discussion or construction. The Niger delegation discovered that when a storm tore the roof of the main warehouse, an eight-meter tall thousand square meter building that stores a month’s worth of temperature-sensitive food of high nutritional value for 80,000 people. A moment of adversity was turned into an opportunity.

The first thought was to install solar panels to run the 20 air-conditioning units needed to keep the warehouse cool as temperatures soared to 45 degrees Centigrade (“If there’s one thing in Niger that won’t fail you, it’s the sun,” says Von Arx). But other humanitarians had seen their solar panels buckle under the heat, so Von Arx and Olivier turned to local technology.

The new roof was constructed with a double layer and insulated with the same straw Nigeriens use to thatch their homes, while compressed stabilized earth bricks were laid to form the walls of the warehouse. The result was “a warehouse that is efficient, green and contributes to the local economy,” says Von Arx. It was so successful that a second warehouse has been built following the same principles, safely storing the medicines the ICRC needs for operations in Niger and northern Mali.

While a locally-focused, deeply contextualized approach can offer impressive results, it pays to seek more broadly too, as Elia Bernabeu Mira, the ICRC’s physical rehabilitation project manager in Niger has found.

The problem is sand. Routine wheelchairs don’t run well in it, instead they sink and get stuck. As a result, disabled Nigeriens have very little autonomy and are largely dependent on others, which in turn affects their mobility and dignity.

Answers were found in unlikely places: the shores of the US and the UK where beach-ready wheelchairs were already a thing. It was, says Von Arx, the opposite of the warehousing initiative: “A solution that is precisely not from this context, but from the other end of the spectrum: a rich world solution for a poor world problem.”

A selection of four different wheelchair models were sourced so that Bernabeu Mira could run a trial to see what worked and what didn’t for people with disabilities. A group of 10 users spent three months testing one wheelchair per month in their day-to-day, real-life situations. “To get closer to the solution, we have to understand what people need in their everyday life and context, and then test to see if the existing products work for them. If not, we have to figure out what adaptations are needed,” she says.

It’s also about a willingness to experiment, to test, to fail, to try again. “We found solutions in the US, in the UK: is it feasible here? Can we implement it?” says Von Arx. “We are in this process now. I don’t have the answers.” Today, the delegation has identified a wheelchair that works well for children and is supporting a local partner to start the first wheelchair service in Niger. For adults, they continue to re-test the other models and explore adaptations and local prototypes based on what users identified as the most suitable features.

Fail together, learn together

Not everything works out as intended, but failure can fuel innovation when properly handled. Creating an environment of trust, openness and support is as fundamental as talking, listening and learning.

“The culture in the delegation is a team effort. As managers you have to provide a space for your team to feel comfortable putting ideas on the table, and developing them,” says Olivier. “If you want innovation to happen in a delegation you need to cultivate the right environment, and that means teamwork and the way you exchange with colleagues.”

It also means a willingness to accept, acknowledge and learn from failure if it comes.

Early in his deployment, Von Arx saw an access to education initiative he proposed stumble. “You come up with ideas – even from management – and they don’t always have to land. You can fail in the process and colleagues can see that happens to everyone,” he says. “I think that has fostered a more open space for ideas, for innovation.”

Searching for answers that work requires support, which is where the Innovation Facilitation Team comes in. “What the Innovation Team enables you to do is kickstart an idea that you have, very quickly,” says Von Arx. “They provide funding, but they also advise on external partners, on what works and what doesn’t. Especially at the beginning, they were very, very important and played a constructive role when it came to our ideas.”

Among the challenges the Niger delegation is taking on in 2021 is one of the biggest in the world: climate change. Violence leading to displacement piles pressure on already vulnerable host communities across the Sahel, but sudden population increases due to the arrival of internally displaced people can quickly exhaust scarce resources such as water, wood and soil.

“We have to look at this issue because we believe there will be no resilience if the ecological environment is degraded to a point where it cannot sustain these communities anymore,” says Von Arx. As ever, the first step will be talking to the communities who understand their problems better than any outsiders, in the hope of identifying solutions.

“There’s a lot of possibilities, though I have no idea at the moment what the answers are. But this is what we have put into the planning for this year: to try to improve on these issues, learn our lessons and see where that takes us.”