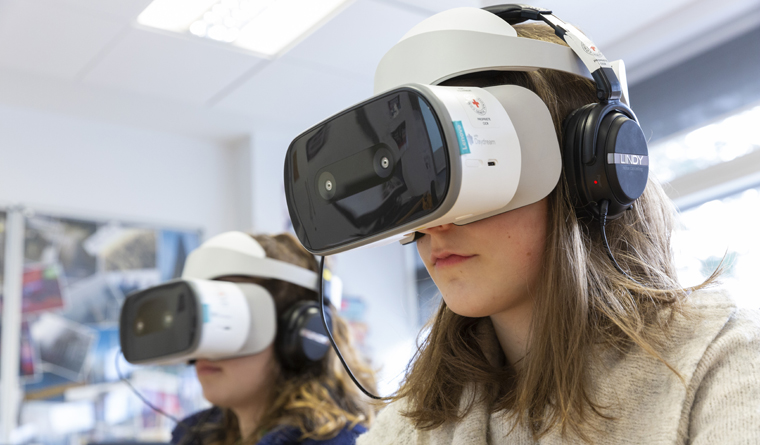 Representative from the International Red Cross in Geneva visits The Perse as part of research they’re doing into a new VR film highlighting the reality of a family living amid the conflict in Syria. Picture: David Johnson Photographic

In its continual effort to engage supporters and donors, the ICRC has partnered with the University of Geneva (UNIGE) in a study on the potential of virtual reality (VR) to connect people in humanitarian crises with those seeking to help them.

As global humanitarian crises multiply, deepen and overlap, and as demands on philanthropy grow due to the economic fallout of the Coronavirus pandemic, the ICRC is exploring new and various ways to reach out to its global supporters.

“We need to diversify funding and we need higher donations from private donors,” says Romain Zappella, the ICRC’s Private Partnerships and Philanthropy Specialist. One answer may lie in VR, a technology in which the ICRC is already a humanitarian leader through its training programs, urban combat simulations, and extended reality (XR) research.

But just because a technology exists doesn’t mean it should be used—or that it will be effective—so the ICRC is joined up with UNIGE’s Professor of Behavioral Philanthropy, Giuseppe Ugazio, to understand more about VR’s unique potential as a fundraising tool.

“We have a strong emphasis on trying to generate and translate insights from behavioral sciences into philanthropy,” explains Ugazio, who is part of UNIGE’s Finance Research Institute specializing in moral psychology and neuroeconomics. “Generating insights is the basic science, but then we have the complex problem of translating it into something applied and useful.”

For Ugazio, the power of VR was clear the moment he first used a headset at the ICRC’s stand at the 2019 Bol d’Or Mirabaud event. In that scenario, called The Escape, Ugazio helped rescue an injured child from a war zone. The scenario was emotionally engaging, both frightening and exhilarating; it felt to Ugazio that for a moment he was truly there.

While people in general might feel compelled to help the someone who is right in front of them, “they don’t always feel morally obliged to help someone in a far off, distant land,” says Ugazio. “This bias is something we know exists, and virtual reality could be a very good tool to combat this because VR brings people right where we need them.”

Making the field a (virtual) reality

The effect of VR may be jarring and powerful, but how effective is it when it comes to driving support for the ICRC?

“We have been using VR to connect with potential partners and bring the field to them,” says ICRC’s Zappella. At the Bol d’Or the VR was a showstopper, causing passersby to pause and engage in a way that leaflets and traditional videos rarely do. But Zappella was unable to verify the rate of conversion from an excited user of VR to a paying supporter of the ICRC. He was concerned that, dazzled by the tech, users were not left with a clear enough understanding of the ICRC’s role; they identified with the scenario in-the-moment, but not with the institution afterwards.

Ugazio is helping solve the conundrum of global, recurring engagement with the ICRC. “Is it actually useful to go in this new technological direction?” he asks. “And if it is, how can we maximize the impact of these different technologies?”

Another tool in the fundraising kit

The research so far has found that VR commonly makes people “feel more present in the situation”, creating empathy with the avatars and leading to “increased emotional arousal”.

Now the partnership hopes to evaluate different resource mobilization modules and how they elicit all of these components. “We want to know if this translates into increased support, more engagement or even just a better understanding of who and what the ICRC represents,” explains Zappella.

A VR experience is not the answer for everyone in every situation, nor will it replace other fundraising techniques. Rather, Ugazio says, it will augment what the ICRC is already doing. “We are trying to identify the different variables, the potential and the different means we have to reach the most people in the most effective way.”

VR clearly has the power to open conversations with individuals but it is not clear if VR alone is enough to transform them into supporters. This study hopes to demonstrate that a well-conceived and constructed virtual environment can cement a long-term relationship with the ICRC, immersive viewers in its purpose, its aims and its causes.

“Humanitarian work still has to be implemented and managed, repeatedly, all over the world,” he says, “but virtual reality is already a great way to attract attention, so we hope to use it to bring an emotional understanding of why we do what we do. Especially as everyone is more home-bound, we think this is a good place to start.”