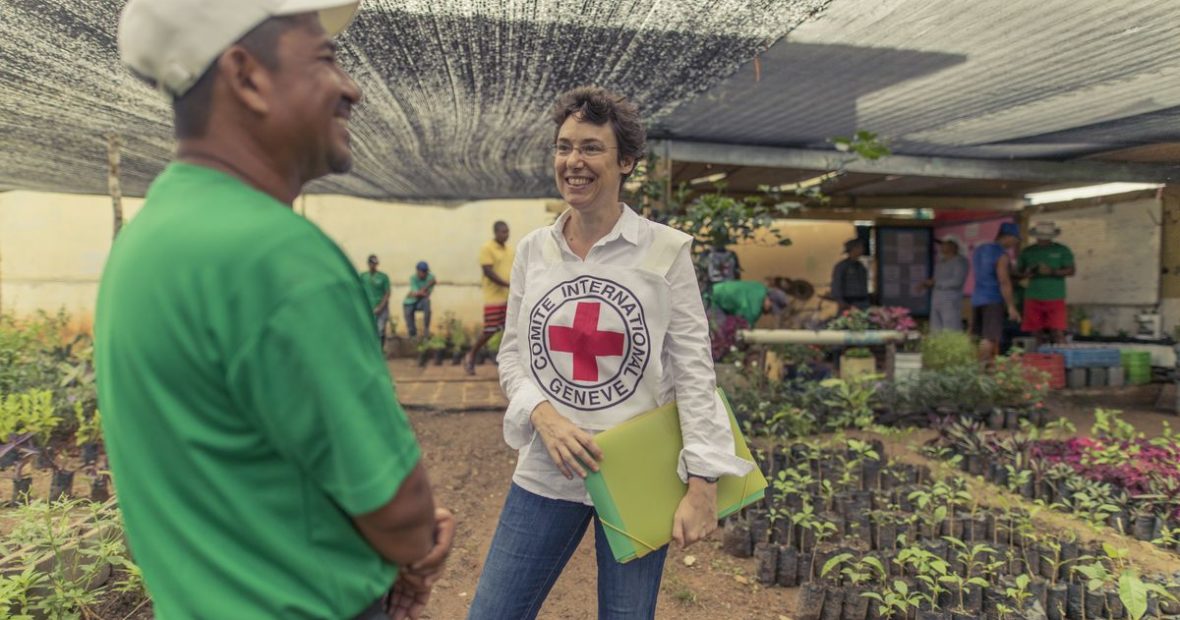 An innovative prisoner-led recycling project at La Joyita Prison in Panama has improved the lives of its inmates.

Prior to this project, ICRC Delegate Sebastian Bustos explains, “The sheer amount of garbage that was produced in the prison overwhelmed the capacities of those in charge of cleaning, who were themselves also deprived of their liberty. The garbage literally flooded every corner of the prison, the detainees walked on the garbage and ate with a sheet covering their head and the food to prevent that the flies contaminated the foods.”

In 2014, detainees began addressing the sanitation situation, and a team of 225 prisoners started to collect and separate the rubbish.

The ICRC supported the effort. Because of well-established access to prisons in Panama, delegates could give technical assistance and equipment. They brokered with authorities to gain approval and recognition of the scheme.

From living amongst dirt and disease, the prisoners started to regain more control over their living conditions, and generated livelihoods and contributed to their own rehabilitation into society.

We set ourselves the challenge of turning the problem into an opportunity. EcoSólidos was born in the prison cell blocks and our motto is the four Rs of recycling: reduce, reuse, recycle and, our addition, resocialize,’” said EcoSólidos founding member Franklin Ayón. He added, “We’ve adopted a salamander as our logo, because salamanders regenerate, like us

The benefits have been significant: from an immediate positive effect on sanitary conditions in the prison, to less tension between gangs, to direct gains for the prison as a whole and the prisoners involved.

The project generated employment, and grew to employ 650 prisoners by January 2019. It has become the penal system’s largest work programme.

For the prisoners, this work has an additional advantage: for every two days they work, the authorities have agreed that their sentences could be reduced by one day, Bustos said. They are also negotiating an arrangement where they would accumulate cash credits in exchange for their work, to be paid out on their release.

Around 90% of the prison’s waste is recycled. On average, more than 12 tons of aluminium and 15 tons of plastic have been processed and sold on each month.

The prison itself has benefited too, gaining around $85,000 in savings and income generated by the 50 tons of recycled waste each month.

This includes 10 tons of organic fertilizer, recycled from food waste. Using this fertilizer, the prisoners’ nursery provides fresh fruit and vegetables for their own use, improving their diet.

The nursery, with a capacity of 20,000 plants, also includes rare native trees – guaiacum, teak and Panama trees – which contribute to reforestation.

“We were all new to this kind of work. No one knew what ‘organic’ was, how waste could be compacted. Nothing. We only saw those things as trash,” said one of the EcoSólidos organizers. “Gradually we started taking things seriously, and it began to grow on us.”

“The ICRC supports us to be able to carry out this project, and to feel good about ourselves, and also for us to know that we are valuable to society.”

Plans are in place to expand this project further to other prisons – with agreement from the Panamanian penitentiary system and Ministry of the Environment – and some other prisons have already copied the scheme on a smaller scale.

“The person in charge of the process is Jorge Santos, a former detainee and founder of the Sembrando Paz nursery,” Sebastian Bustos said.

“Indeed, after his release from prison – he was acquitted after serving 3.5 years without being charged – he worked for three months with the ICRC in reproducing a nursery in our offices, until he was offered an opportunity by the Minister of Environment to become the Coordinator of Penitentiary Projects of the Ministry of the Environment.”

There were some delays in getting the authorities to establish the necessary formal structures to expand the project, but eventually – following ICRC recommendations – the position for a project coordinator at the penitentiary headquarters has been approved. They are now seeking a recruit matching the job profile: ideally a former detainee.

The project has also been well supported by the diplomatic community in Panama, who have contributed materials for the nursery, and participated in symbolic plantings.

In this way even more prisoners could gain job skills and reintegration opportunities, while making positive environmental impacts and improving living conditions.

The benefits of this project touch everyone involved – the prisoners, the authorities, the surrounding communities, and, ultimately, the planet.