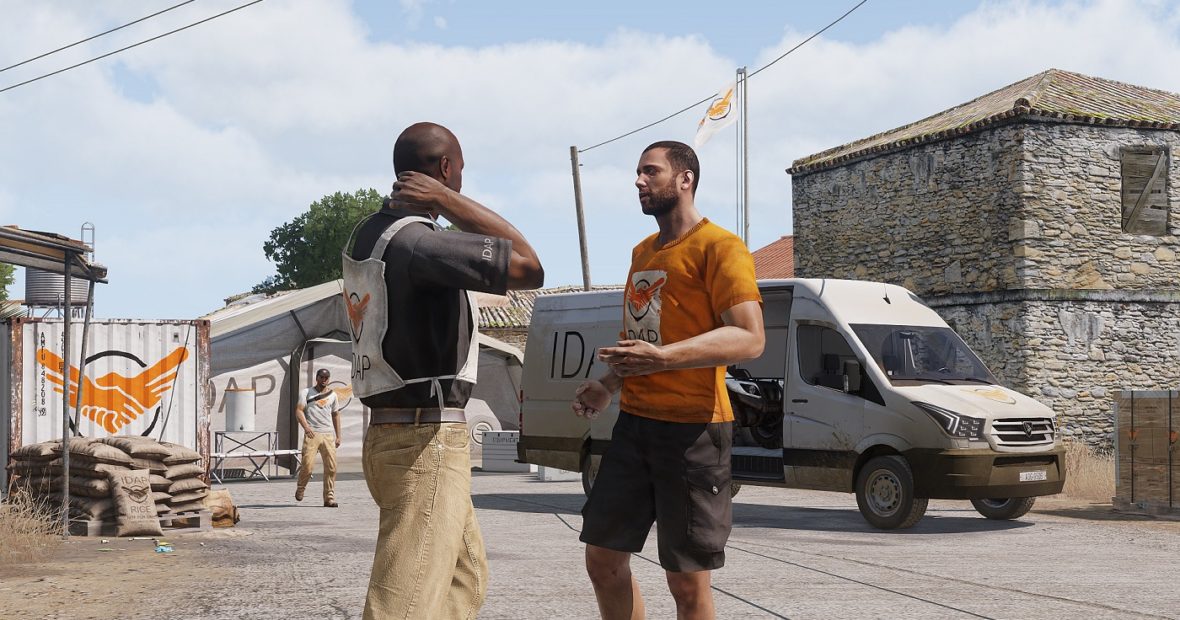 Virtual humanitarians enter the gamers’ battlefield. The ICRC posed a challenge to the makers of war games: why not introduce the rules of warfare into games, and in so doing actually make them more realistic?

Gamers want a realistic gaming experience, giving developers a constant incentive to inject a greater sense of reality into every aspect of the game. Many of the characters are more lifelike, movement often seems more natural. Creators pay careful attention to the landscapes; the authenticity of historical contexts; the weapons, vehicles and uniforms; and the sound effects.

For the ICRC, the challenge was to also make the legal context more realistic. The gaming community numbers in the billions, with a significant proportion being young men, so, the world of games offers an opportunity to open up a new audience to an easily overlooked aspect of warfare: international humanitarian law (IHL).

Most game developers were uninterested in the ICRC’s proposal that real laws be made part of their simulated wars.

There was even outrage, with some commentators thinking that the ICRC, having “virtually lost the plot”, wanted gamers prosecuted for war crimes committed on virtual battlegrounds. The ICRC released a statement clarifying that “serious violations of the laws of war can only be committed in real-life situations, not in video games.”

But one company rose to the challenge.

Bohemia Interactive, the developer of a popular interactive military game Arma 3, agreed to work with the ICRC specialists to create the ‘Laws of War‘ downloadable content (DLC) module.

Bohemia Interactive CEO Marek Spanel explains: “We knew this DLC’s theme might seem a bit unusual, but we also felt that it has a rightful place in a game like Arma 3. At the same time, our community normally expects more traditional content you’d see in a military game, such as new weapons, tanks, and helicopters.”

“That has made it even more amazing to see the immense level of player support for the Laws of War DLC, which really shows again how both games and the gaming audience have matured,” he says.

In Arma 3: Laws of War, players get to engage and interact with a humanitarian group, and participate in activities such as mine detection and clearing.

The module also includes a game-within-a-game, in which the character participates in a virtual-reality training programme on the practical application of IHL.

“With over two billion gamers worldwide, video games have an incredible potential to convey the importance of international humanitarian law,” says the ICRC Director for International Law and Policy, Helen Durham.

“The collaboration between Bohemia interactive and the ICRC has been extraordinary and we have learned a lot from each other by exchanging ideas and our respective expertise on how to incorporate IHL into a video game.”

An extra layer of complexity

Christian Rouffaer, Head of Virtual Reality at the ICRC, a former Swiss military officer and an avid gamer himself, says: “With video games, our goal is not to spoil the fun, but rather to expose players to an extra layer of complexity present in war – to let them learn more about the roles and responsibilities of real soldiers when it comes to IHL. This is where our collaboration with Bohemia Interactive comes in: their team has always been interested in offering gamers a realistic view of armed conflict.”

On important addition has been the introduction of weapons prohibited under IHL, such as cluster munitions. Within the game the humanitarian forces are tasked with tackling weapon contamination. However, the inclusion of these weapons opens up possibilities of their misuse.

Rouffaer admits that there will be players who will flout the Geneva Convention, and use these situations to deliberately commit war crimes within the games.

“Everyone on the forums says, ‘Yes! Thank you! Give us civilians and humanitarian workers and cluster munitions and we will use these new guns to eradicate as many of the first group as possible,” Rouffaer says.

“But by saying that, it means that they will have consciously been saying, ‘We are going to break the law.’ It means that, even if it’s at a very low level, they now have an understanding that there was a law in the first place.”

“The success of the Arma 3: Laws of War DLC has shown us that video games are one of the many ways to reach new audiences and call attention to the fact that wars do have limits and rules,” Durham says.

As a bonus, Bohemia Interactive pledged a part of their proceeds as a donation to the ICRC cause. In 2017 this came to fruition. True to its word, the company handed over a check for USD 176,667, half the profits from direct sales of the game.

Awareness is one of the first steps in affecting behavioural change. And ICRC’s work with Bohemia Interactive using virtual situations to spread awareness, and thereby affect behavioural change, is just one step in a wider innovative programme.

A world of virtual possibilities

The ICRC has dedicated resources to a number of innovations that use virtual situations – including games and virtual reality (VR) simulations – to further its work in the real world. The feeling of immersion that virtual reality provokes in participants has enormous potential for learning and behavioral change.

Examples include a virtual visit to a prison cell, where the subject experiences varying degrees of overcrowding. Another uses virtual reality scenarios to train personnel on carrying out field evaluations. Yet another allows the ICRC delegates to illustrate accounts of abuses – by military or prison authorities, for example – with short, realistic 3D animations that preserve details of the events while maintaining anonymity.

With VR technology advancing rapidly (along its more advanced successor XR – extended reality – in which virtual and real elements can be made to interact), this area has enormous potential. Beyond games – the largest part of the current market – there is escalating interest from a wide range of sectors.

Already a range of applications – military, medical, educational, and more – are in development and use, and the industry is poised to be the next big thing in tech. The ICRC’s VR unit is there to ensure that the potential of VR will also be applied to protecting lives and dignity of people affected by conflict.